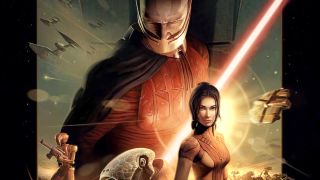 Projects from all over the Star Wars timeline are on the way, with Star Wars Episode 9 on the leading edge, but we haven't heard much from the distant past of Star Wars: Knights of the Old Republic in some time. According to an MTV News interview with Lucasfilm president Kathleen Kennedy about what comes next for Star Wars after The Rise of Skywalker, that may change soon.

#Lucasfilm president Kathleen Kennedy talked to us about the future of #StarWars – including a Knights of the Old Republic movie and female filmmakers taking the helm, as well as Palpatine’s surprise return in the trailer for @StarWars #EpisodeIX pic.twitter.com/HCjEhdlRv7April 16, 2019

After talking about the possibility of characters from the new trilogy appearing in future movies, and a relative dearth of women directors in recent and upcoming Star Wars projects, MTV's interviewer asked about Knights of the Old Republic. "You know, we talk about that all the time. Yes, we are developing something to look at," Kennedy answered.

"Right now I have no idea where things might fall, but we have to be careful that there is a cadence to Star Wars that doesn't start to feel like too much. We don't have a crystal ball. We tried a little bit with Solo to see if we could do two movies a year, and whether or not there was really an opportunity for that, and we felt that's not going to work so we backed off of that a little bit. But it doesn't mean we don't think about lots of different stories because that's the exciting thing about this universe."

Given the context of the conversation, it sounds like Kennedy's talking about a movie, Disney+ streaming service show, or other entertainment property set in the Old Republic era rather than teasing a new video game. That's all the more likely given that BioWare has reportedly been trying and failing to revive the Knights of the Old Republic series for years. Lucasfilm could skip all the red tape and make a Star War whenever and wherever the heck it wanted.

Aside from Star Wars Rebels picking up some lore details like the planet Malachor from BioWare's beloved RPG, and Star Wars: The Old Republic trucking towards its eighth year as an active MMO, Star Wars' distant past has fallen back into obscurity in recent years. Even if we can't play them, I'd love to experience more stories from that era.

Speaking of timelines, you can check out our video guide to the Star Wars chronology below. Or get ready for the future with our list of every new Star Wars movie.