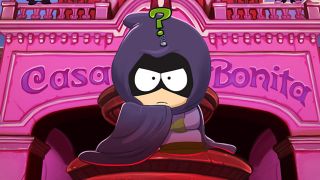 You've probably finished South Park: The Fractured But Whole's story by now, but soon you'll have a new excuse to reunite with Coon and Friends. The game's first DLC episode (we're not counting the combat challenge DLC), From Dusk Till Casa Bonita, is coming to Xbox One, PS4, and PC on March 20.

In the DLC, Mysterion (AKA Kenny) recruits you in an attempt to rescue his sister, who is currently being held in Cartman's favorite restaurant: Casa Bonita. If you've never heard of it before, Casa Bonita is a real-life Mexican restaurant in Denver that has a puppet show, miniature haunted house, mariachi band, a place to dress up and take pictures like you're in ye olden days, and even a waterfall where divers do short skits for entertainment. And yes, it is pretty cool.

The DLC's title is also a riff on the 1996 movie From Dusk Till Dawn (starring George Clooney, Quentin Tarantino, and Harvey Keitel), a film about two criminal brothers who, after taking an ex-preacher and his family hostage, flee to Mexico only to wind up in a dive bar that's secretly a lair for bloodthirsty vampires. Fittingly, your new enemies in the From Dusk Till Casa Bonita DLC are the Vamp Kids - a clique at South Park Elementary who think of themselves as vampires and argue with the Goths and Emos over who thinks life sucks the most, and who's just a poser.

Along with the new storyline and enemies, you'll also get access to a new class (the Netherborn), and a new supporting character (Henrietta, the Goth). Meanwhile, new Goth costume pieces will help you complete your transformation into a dark harbinger of justice. No gameplay's been shown just yet, but I imagine the Netherborn class will be great for all us edgelords who love comic book anti-heroes like Spawn, or just fancy ourselves fans of the occult.

If you want to make sure you're as powerful as possible before tackling the DLC, be sure to read our guides on how to beat Morgan Freeman in South Park: The Fractured But Whole, as well as where to find every piece of yaoi in town. Because yes, of course you do those things in a South Park game.