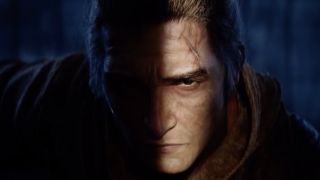 As we said in our Sekiro review, From Software's latest is another unmissable action RPG set in an exciting, enticing world. To further explore that world, From Software is partnering with manga artist Shin Yamamoto on a new manga starring Hanbei the Undying, who serves as a tutorial character in the game itself. Sensibly, it's called Sekiro Side Story: Hanbei the Undying. It'll appear on Comic Walker's website on May 27, and it's also been licensed by US publisher Yen Press.

"The Sengoku Era… A time when losing a battle meant losing it all," Yen Press said in a story teaser. "The Sword Saint, Isshin Ashina, aims for world domination…That is, until he encounters a certain Samurai…" The publisher teased more of the manga's focus on Twitter, though it's pretty vague: "In a world of utter turmoil where allies, foes, and corrupted immortals all have their shadows, it's up to one to restore balance to all."

Yen Press also shared the first official snippet of the manga. Have a look:

From Software will supervise the Sekiro manga, but Yamamoto will be in control. This isn't his first video game manga adaptation: he previously handled the art for Monster Hunter: Flash Hunter, which is pretty sharp from what I remember of the first volume. Judging from the teaser panel, his Sekiro manga will deliver exactly what you'd expect: blood splatters, angry samurai, and autumnal backgrounds. Classic.

We aren't Hanbei the Undying, but we've still got a Sekiro guide and some Sekiro tips to help you survive.