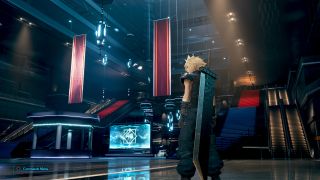 PS4 players will soon be able to get a better sense of how 2020’s Final Fantasy 7 Remake will look and feel to play, all thanks to a new leak seemingly confirming that a demo is on its way.

We know this because the demo was briefly glimpsed by tracking site Gamestat, the same source that most recently confirmed the existence of the Resident Evil 3 remake which then went on to be officially announced later. Of course, Square Enix is yet to comment on the appearance of this demo let alone offer a time of release, but considering Final Fantasy 7’s March 3, 2020 release date, odds are we won’t have to wait long before it pops up on the PSN.

A long-awaited reimagining of 1997’s original PlayStation One classic, Final Fantasy 7 Remake’s first episode is exclusively releasing on PS4 for a limited time, with the second episode already well into development. Our most recent look at the game came during The Game Awards 2019, where a minute-and-a-half-long trailer showcased its healthy mix of cinematic spectacle and the new “Active Time Battle” combat. If this trailer is anything to go by, Final Fantasy 7 fans are in for a treat come March.

We’ll have to wait to see what section of the game this Final Fantasy 7 Remake demo will feature, but it stands to reason that it’ll likely be something similar to the one playable at E3 earlier this year. The chance to get another taste of Midgar sooner than expected? How’s that for a New Year treat.

Don't need a demo to convince you for a Cloud-heavy March? Find out the best place to purchase the game using our handy Final Fantasy 7 Remake pre-order guide.