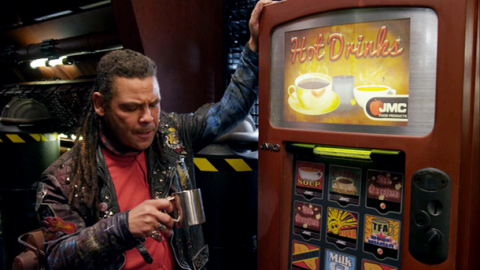 THE ONE WHERE Lister receives a troubling letter from an ex, and has even more trouble with a vending machine that threatens to turn bunny boiler.

VERDICT Okay, I admit it. I feel slightly churlish giving “Dear Dave” only three and half stars, and not just because whenever I give Red Dwarf anything less than four stars the comments section fill up with people moaning about how mean I am.

No, I feel that way because the episode actually features some of my favourite comedy set pieces of the series: the “moves” conversation (“Women have moved on from that move.” “Moves don’t move on.” “Moves move on.” “What, moves move?”); Rimmer’s letters to JMC praising himself (“They say, due to the number of these letters of recommendation, they have absolutely no option but to request you stop writing them”); Cat’s charades (“Your clothes are hanging on the line, and the mail pod crashed into them? How’s that two words?” “Cos when it happened, I said, ‘Oh man!’”); and, of course, the finger-wetting machine (see Best Line). There’s comedy platinum here, make no mistake.

It’s also a nostalgic return to really, really old-style Dwarf . Many, SFX included, have noted how Red Dwarf X has felt like a return to classic Dwarf , but the comparisons have usually been with series three, four and five. “Dear Dave”, however, feels like a throwback to the very, very early days. No complicated plots, no guest stars (unless you count the voiceover artists), very long scenes, and comedy that grows from the loneliness of being the last remnants of humanity in space – if Kryten weren’t in it, it could easily have been a series two episode. This may possibly have been a cost-saving measure (and believe us, episode six looks a lot more lavish, so it makes sense), but Red Dwarf thrives under adversity, so that’s no criticism.

Despite all that, though, “Dear Dave” doesn’t quite hang together. As superb as individual elements may be, there’s a slight feeling of a sketch show to it, like Doug Naylor had all these great routines worked out that never fitted into any other episodes, and so he’s tried to cram them all in here rather than waste them. Unfortunately, neither the jealous vending machine plot nor the “who’s the daddy?” letter plot are strong enough showcase these moments to their best advantage. It’s like settling down to three course meal that has a Indian starter, a Chinese main course and an Italian sweet. All great dishes, but the meal itself is less than the sum of its parts.

The cheap sparkling wine with this meal is the gag with Lister “humping” the vending machine. It’s doesn’t quite payoff, mainly because no-one would ever try to lift a vending machine up the way Lister does; it feels just a tad overly-contrived.

Some classic Red Dwarf moments, then, but not a classic episode. Still a damned entertaining one, though.

BEHIND-THE-SCENES The whole vending machine subplot was a very late addition, and indeed wasn’t even filmed before a live studio audience, but recorded later and edited in. Some scenes were filmed even later than that, in a third reshoot that took place after the sets had been taken down. The whole Subuteo scene and following conversation, for example, were filmed in front of a green screen, though it’s near impossible to spot unless you know. The laughter track for all these scenes is “real” though – the extra footage was shown to a specially-invited audience.

THE FINAL SCENE… Doug Naylor considered softening the final line, substituting “trollop” for “slag” but was convinced the word was justified when he saw the live audience reaction to the line. They laughed. A lot.

CARRY ON MOMENT OF THE WEEK “As long as it’s wet and melty you don’t care where you stick it.”