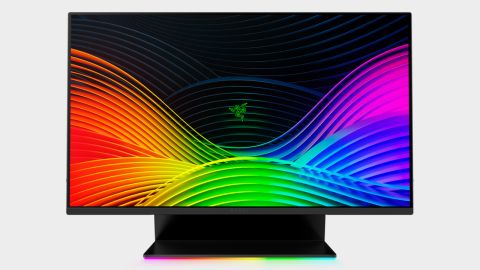 A premium gaming monitor in every respect; Razer's first foray into gaming displays is an enormous - and beautiful - success.

Known and well-liked for their accessories, the Razer Raptor 27 marks the hardware behemoth's first foray into gaming displays - and boy, does it stick the landing. The Raptor is a 27-inch panel that has a suitably 'Razer' name and design, but it backs that up with good-quality specs under the hood. An IPS panel with a 1440p resolution, it has a 1ms response time and 144Hz refresh rate. Strong stuff in terms of the gaming basics, but is it worth the medium to high price tag of $700 / £700? In short, yes.

The Razer Raptor 27 is a sleek unit that requires no assembly out of the box at all. Just two pieces comprise it - the monitor panel and the stand - and they are solidly fused. The L-shaped stand is also angled pleasingly, attaching seamlessly at the back to create the hinge point for adjustments. Meanwhile, a neat approach to cable management helps keep things tidy; cable guides run along the back of the base. It's simple, strong, and elegant.

Despite it being 'only' a monitor, you don't have to look far to see all the hallmarks of a Razer design either. The Raptor takes a 'black with a side of black' approach, while the cables are an incredibly distinctive Razer green that, as we know, contrasts off the harder black materials with a bang.

Elsewhere, the front of the monitor provides a screen that is almost lacking a physical bezel on three sides. However, there's a sort of in-picture bezel present that a lot of monitors have nowadays instead. This ever so slightly reduces the overall image, but once you get playing or watching it's not noticeable and has no impact. As for the back of the panel itself, it's covered in a black mesh material - much like that found on speakers. This is pretty cool and makes the design a bit more interesting.

All in, it's a simple but excellent design and one of the best and most pleasing I've seen on a gaming monitor in a while.

There's some silky-smooth picture tech behind that panel. In theory, merging ultra low motion blur with a 1ms response time and a 144Hz refresh rate is a surefire way to ensure smoothness in picture. Throw in G-Sync compatibility, like the Raptor does, and this Razer screen is elevated to being easily one of the best G-Sync compatible FreeSync monitors going.

It's the same story with the color range and accuracy this IPS panel offers. The Raptor is also teamed with an HDR400 rating, itself backed up by a 95% DCI-P3 color gamut for superior quality. This might sound just like another baffling acronym to add to the ranks of techy abbreviations, but it's the one to look out for on modern gaming monitors; we are increasingly interested in the DCI-P3 color gamut, as it surpasses sRGB and is now the gold standard for films and screens globally. Anything in the mid-90 percentages and upwards are lofty claims, but the Razer Raptor comes good on its aspirations. The colors here are exceptional.

While we're on the subject, followers of Razer won't be surprised to hear that the Raptor's rather tasteful RGB elements are fully integrated with Razer Chroma, meaning you can sync it with your other Razer gear.

To finish up on the features front in a relentlessly utilitarian fashion, you're well covered with ports too, as you've got: an HDMI 2.0b; one DisplayPort, one USB-C (that supports DisplayPort in alt mode); two USB 3s, and a good old headphone jack. Solid enough.

As soon as the Raptor is turned on, the crispness in picture and depth in color is crystal clear. Every icon sits with an almost 3D quality on the desktop - an encouraging start to say the least.

Booting up and playing though several hours of games was (predictably, with that start) a joy. The Division 2 was vivid and vibrant, with even semi-visible and semi-tangible elements like the weather, fire, and smoke being astonishingly clear and pleasant. Red Dead Redemption 2 was beautiful in every way, with bright light sources in grimy pictures, to lush landscape goodness in massive vistas. Apex Legends was ridiculously vibrant, colorful, and smooth, made even more enjoyable by the Raptor easily handling the 140-odd frames per second our machine can (fortunately) pump it out at. Control's movie-like cinematography was captured brilliantly and clearly, each edge of every bit of the brutalist architecture a triumph of crisp lines and clear, glorious textures. And, finally; Metro was a grimly awesome experience in terms of grimy visuals with pops of color underground, and detailed scenes above. Generally, whatever the game and whatever the PC can put out, the Raptor perfects. That's true both in terms of quality, color and vibrancy, and smooth pictures and frame rates. In every gaming instance, the images are smooth as you like, presenting beautiful worlds, beautifully.

Somewhat predictably, the Raptor was also great for everyday work and admin. Rifling through internet tabs, pages, and productivity apps offered the same distinct clarity and performance I'd enjoyed with games. I can only imagine how good a dual-monitor setup would be with two Raptors. The stuff of dreams, presumably.

This is a monitor that demands serious consideration whether you're building a new setup or upgrading an existing one. The Raptor's perfect blend of gaming monitor specs, with its overall image quality and the level of connectivity, means it is, obviously, a PC gamer's monitor at heart. However, such is the quality of the picture, I would happily recommend it to someone who wants something for their console too - especially if it's for a console/PC setup or for someone who wants to maintain that flexibility and PC-focus for later down the line. The price tag could perhaps be a bit lower I think - if it was nearer the 500-currency mark, you could get two in for around a thousand - but the Raptor is a premium device that warrants the cost.

This is a terrific gaming monitor, then, and marks a very successful first foray into gaming displays from Razer. The design is subtle but cool, the connectivity strong, full of options, and tidy. The screen's speed is fast and pacey for smooth pictures, the image quality is crisp and gorgeous, and the color range and contrasts are deep and immersive. I even like the RGB lighting under the stand. As a result, it is absolutely and definitely one of the best gaming monitors you can get for 2020.

A premium gaming monitor in every respect; Razer's first foray into gaming displays is an enormous - and beautiful - success.