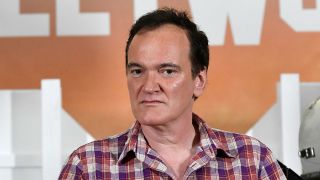 Quentin Tarantino has said that a "war for movies" played out last year between auteur filmmakers and blockbusters, such as the Marvel and Star Wars franchises.

Speaking to Deadline, the director spoke about how "commercial product[s]" owned by conglomerates – namechecking Marvel, Star Wars, Godzilla, and James Bond – had "never had a better year than last year".

"It would have been the year that their world domination would have been complete," he said. "But it kind of wasn’t... A lot of original movie comment came out and demanded to be seen, and demanded to be seen at the theaters. That ended up becoming a really, really strong year... I think when you sum up the year, it’s cinema that doesn’t fall into that blockbuster IP proof status, made its last stand this year."

Tarantino released Once Upon a Time in Hollywood last year, while the awards chatter from last year's batch of movies has been dominated by original works such as The Irishman, Parasite, 1917, Marriage Story, and Jojo Rabbit.

"This is a really groovy year," the filmmaker continued. "To combat something like Avengers: Endgame, which for the month before it came out and the month after, you couldn’t talk about anything else. They tried to do that with this last Star Wars and I don’t think it quite worked, but you couldn’t get on United Airlines without running into all the tie-ins, and even the safety commercial had a Star Wars scene."

Tarantino has become the latest in a line of directors who has spoken critically about franchise movies. The debate started when Martin Scorsese related the Marvel movies to theme park rides. He later clarified that they were "a new art form" but added franchise movies should not "crowd out Greta Gerwig, Paul Thomas Anderson and Noah Baumbach and those people, just don't, in terms of theaters."