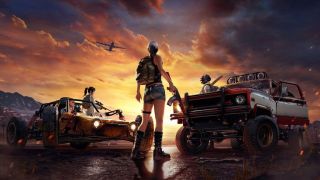 Here's something I didn't expect to hear today, or indeed ever: a PUBG story mode of sorts is on the way, and PUBG Corp. hired ex-Sledgehammer boss Glen Schofield to lead it. As Schofield announced on Twitter today, he's now CEO of Striking Distance, PUBG Corporation's new independent game studio, which is working on a PUBG narrative experience.

"We're working together to build the studio from the ground up so we can begin crafting an original narrative experience in the PUBG universe," Schofield said, later adding that "as a creative, the freedom to explore the PUBG universe has me excited about the possibilities, which we view as beyond battle royale."

Now, I'm not much of a creative, but I've got to be honest, I have no idea what story you'd tell in the PUBG universe. I didn't know PUBG had a universe, I thought it just had islands, planes, guns, and backpacks. Perhaps the riveting tale of a man who fights through hell and high water because he really, really needs a better backpack?

Whatever it is, it sounds like this "narrative experience" will play very differently from PUBG as we know it. It'll be interesting to see whether it's a proper PUBG story mode added into the main game or a separate game available as a standalone. Both ideas sound a bit ridiculous to me at first blush, but at the same time, a PUBG story mode is such a wild idea that it's basically a blank slate. Schofield and the development team at Striking Distance could do virtually anything with it, and Schofield's certainly led some good games in the past (for example, Dead Space), so maybe it'll wow us in the end.

While you wait on whatever Striking Distance is cooking, you can try some of these battle royale games like PUBG.