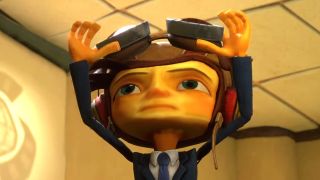 Psychonauts 2 won't make its 2019 release window after all. The crowdfunded follow-up to Double Fine's 2005 action platforming adventure is now set to arrive in 2020, according to an update on the game's official Fig page. Double Fine had set a 2019 release window for the game back at the end of 2018, and it noticeably did not provide an update on that timing despite having a big presence at E3 2019. You probably didn't need to be a clairvoyant to see this delay coming.

"We’re now targeting next year for release," the studio wrote in the update. "We know it’s always disappointing when you have to wait a bit longer, but we also know that you are an amazing, supportive bunch, who - just like us - want the game to be as good as possible. So we’re hopeful you’ll understand!"

Double Fine didn't say whether the delay was related to its acquisition by Microsoft, however, it did reiterate that it still plans to deliver the game to all previously announced platforms, including PS4. If anything, the financial security that comes with being bought by Microsoft probably made Double Fine feel more comfortable with delaying the game (rather than rushing it out to start recouping development costs), so I wouldn't take this as a bad sign. And hey, you may not be able to play Psychonauts 2 for a while longer, but at least you can savor this toothsome look at the game in action.

The studio also shared an in-depth look at its E3 presence with this documentary video, which has an interesting new light with Double Fine's new status as a Microsoft studio. I wonder if Double Fine will remain this open about internal goings-on as it further integrates with its Microsoft overlords?

While you wait for Psychonauts 2 to arrive, enjoy some fantastic savings with our guide to Amazon Prime Day game deals. Some online stores give us a small cut if you buy something through one of our links. Read our affiliate policy for more info.