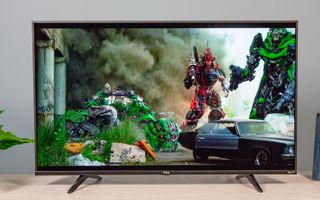 Amazingly, you can pick up a 43 inch 4K TV for a mere $159 this Black Friday but you should be seeking value-for-money deals over buying a cheaper TV that you might later regret. If you want a higher-specification 4K TV with Dolby Vision and HDR support - that will genuinely enhance your Ultra HD gaming and Netflix viewing - then our top pick is this TCL 43 inch 4K TV for only $249.99 () from Walmart. Don't just take our word for it: the TCL 43 inch was recently rated as the #1 cheap 4K TV by our sister site Tom's Guide who praised its 'unexpectedly premium features' and 'great color reproduction'.

Don't miss the Tom's Guide review of the TCL 5-Series Roku TV if you want to know more, including details of the integrated mic for voice control. This glowing praise is based on the older TCL 435S17 model, while the Walmart offer above is for the newer - and superior - TCL 43S525 model. They're basically identical, but the newer model adds HLG support and Game Mode. This 43 inch TCL 4K TV's gaming performance was rated an impressive 8.4/10 by tech testing site rtings.com.

TLDR: this is highest quality, best-value, cheap 4K TV deal you're likely to find this Black Friday. If you're looking for something more high-end, on a budget to suit, then check out our guide to the best Black Friday TV deals 2019.

The best Black Friday game deals across the web (US)