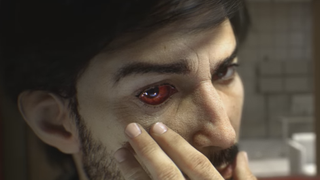 One of the most enticing teases from E3 2016 was Bethesda's re-reveal of Prey. Originally a sequel to the first Prey from Human Head Studios, the game seems to have been reworked from the ground up and made into something entirely new. And yet, there's a lot we can infer about the plot, not thanks to a slick trailer or press release, but alleged design documents which leaked years ago.

It should be noted that while these documents contain several different plots and none of it is 100 percent confirmed, there are potential spoilers ahead.

Just to make sure you've got extra room to back out now before we go too deep, I'm going to put the Prey E3 2016 trailer riiiiight here:

Okay, so what do the leaked design documents tell us? There are four main plot outlines given, but they all share two common themes: aliens and technology run amok.

Plot #1 involves a Groundhog Day-like scenario where our hero is living the same day over and over. He chases a woman named Danielle through an industrial complex built on top of a crashed alien ship. Attempts to reverse engineer the extraterrestrial tech have gone horribly wrong (don't they always?) and in the end, players have to choose whether the alien ship is repaired and leaves or if they'll blow it to pieces. Also, Danielle becomes part of the alien ship's AI at some point.

Plot #2 is inspired by films like Dark City and Brazil. Living in a city that at first appears straight out of the '50s, our hero pulls out a high-tech device that can hack the city around him. The city, like the industrial complex in Plot #1, is built on top of alien technology. The synopsis ends with "He hacks an alien sentry robot to fend off the [men in black suits] and makes his escape."

Plot #3 has the player control a man working for the government investigating the existence of aliens. But small visual cues - such as refrigerator doors arranged backwards and slight compression errors - and an AI named Danielle suggest not all is as it seems. The player discovers they are onboard a spaceship, where humans are performing experiments on fellow humans and aliens alike. Everything you've done is part of an elaborate test. The docs don't describe how this situation is resolved.

Lastly, Plot #4 shunts players off to a tropical island, where it is discovered that humans have been attempting to create an AI based off alien technology. That's it. Of all the potential plot beats, this one is the least developed.

In case you didn't watch it above, the trailer opens with a robotic female voice telling you what day it is and what's on your schedule. That could line up with the female AI noted in the plot synopses. There are also visual distortions that can be seen, such as this coffee cup materializing out of nowhere…

And this distortion when Morgan stands in front of a mirror.

We also see some human scientists - or at least their silhouettes - from behind glass, as a male voice interjects, "Looks like we have some tests to run today."

Lastly, as the trailer comes to a close, we see our hero take a seat after looking out a window into space, with a large structure floating amongst the stars.

All of these line up nicely with the points made in Plot #3, where your fellow humans are using you as a guinea pig (in space) and lying to you about the truth of your situation. That said, the reoccurring day plot point from Plot #1 is also clearly part of the new Prey, or at least its setup, so we could be seeing an amalgamation of Plots #1 and #3.

Regardless of which way the story goes, a section of the leaked documents labeled "High level notes from Raph" (likely referring to Raphael Colantonio, Arkane Studios CEO and co-director of Dishonored) suggests that are some tropes the game will be staying away from.

"Raph" wants the team to avoid visual cliches such as the slimy metallic bodies of the Alien films, as well as the neon-tinted glow of Blade Runner. He also wants the game to avoid M-rated gore, and describes the game as a spiritual successor to System Shock 2. Hence, I imagine, all the "alien technology and AI" themes.

Game concepts morph and grow over time, so don't be too surprised if the final product doesn't really line up with any of the above plot points. But then, try not to be surprised if the opposite ends up being the case, and you meet a possibly untrustworthy AI named Danielle as you try to escape an alien-infested spaceship when Prey launches for PS4, Xbox One, and PC in 2017.