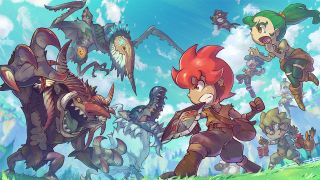 Little Town Hero is heading PS4 in a few months, but as of right now, it'll only be available in Japan.

Pokemon creator Game Freak dropped the adorable RPG for Nintendo Switch in October 2019, proving they could make a non-Pokemon-related title that could be just as delightful. Little Town Hero's protagonist, Axe, wants to see the world outside his village - but no one is allowed to leave. However, he quickly gets way more than he asked for when monsters attack the village and he's forced to help defend it using a mysterious stone found in a coal mine.

The game's setting is beautiful, with colorful environments that beg for exploration and a beautiful soundtrack scored by Undertale developer Toby Fox. And now PS4 players can get in on the fun, as physical and digital versions will drop on April 23, 2020 - in Japan. No word yet on if (or when) the game will be released either physically or digitally for PS4 in other countries, but stay tuned.

NIS America also recently announced that Little Town Hero will be getting a limited edition physical release for the Switch. The 'Big Idea Edition' includes a boxed copy of the game, the soundtrack, an art book, two pins, and a poster for $40 / £50. It's important to note that the PS4 version of Little Town Hero wasn't referenced in the special edition announcement (it was announced a few days later), so the west could potentially get a PS4 release sometime in the future. Fingers crossed.

If this story got you in the RPG mood, check out our 25 best RPG games list.