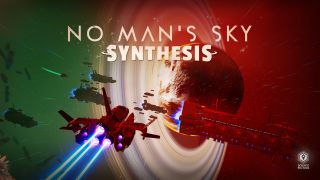 No Man's Sky is getting another major free update that will introduce a host of new features and improvements to Hello Games' space-faring adventure. A list of patch notes details almost 300 tweaks and changes, with the studio adding a variety of  features requested by the No Man's Sky community.

The update is named Synthesis because "it's a collection of features that create a connected whole," and is set to release on November 28. One way the update will deliver on this idea of creating a "connected whole" is the match up of features for VR and non-VR players are across the board, so VR players will now be able to ride creatures and take photos, and those playing without VR can drive vehicles in first person.

Some of the highlights include being able to upgrade your starship, as well as being able to salvage ships for parts. And instead of having just one trusty Multi-Tool, the update will enable you to own and customise multiple Multi-tools. You'll also be able to create more than one character in the customiser, which you can switch between.

The Synthesis update will also introduce new technology and base parts for you to play around with. A whole host of inventory and UI issues have been addressed in the update, and will introduce a whole new space map and a Personal Refiner that you can use directly from your inventory.

The terrain manipulator for your multi-tool has also been given an overhaul, with new visual effects and ways to carve into the planetary terrain. An undo function will also be introduced if you're not happy with the way you altered the terrain, and a new feature that will enable you to leave a permanent stamp on the world with your edits.

Outside of these new features, the update will address hundreds of bug fixes and iron out any kinks to give No Man's Sky an extra lick of polish. You can see the full list of patch notes here.