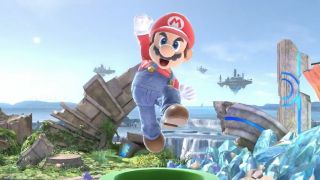 For the first time ever, first-party Nintendo games are now available on the Humble Store. A selection of Nintendo Switch games were added today, including such hits as Super Smash Bros. Ultimate, Pokemon: Let's Go Eevee and Pikachu, Super Mario Odyssey, and The Legend of Zelda: Breath of the Wild.

A smaller selection of 3DS games is also available, mainly Pokemon games ranging from Blue and Red to Ultra Moon and Ultra Sun, as well as a few retro games like the original Super Mario Bros. and The Legend of Zelda. You can also get 3-month or 12-month Nintendo Switch Online subscriptions.

Humble is a great storefront and it's nice to see it add Nintendo games, but there's a ridiculous amount of fine print to sift through here. Firstly, Humble's new Nintendo section is only available to US customers. Secondly, all these games are digital, and Humble is selling them for the same price as everyone else, including the eShop. Actually, since the eShop is currently in the middle of a New Year's sale, some games are actually more expensive on Humble. Mario Kart 8 and Splatoon 2, for example, are $60 each on Humble yet only $42 direct from the eShop (through January 10).

Here's the kicker: Nintendo games are not eligible for the Humble Rewards program or for charitable donations. Whereas most Humble purchases let you put a portion toward various charities, Nintendo games are currently exempt from this. Why? I've reached out to Nintendo for clarification and will update this story if I receive a reply.

As-is, Humble's Nintendo store is just a more limited extension of the eShop. Yes, the presence of Nintendo games opens up the possibility of a Humble Nintendo Bundle, but I wouldn't hold your breath for that. Nintendo rarely lowers the prices of its first-party games even years after release, so I doubt we're going to see Super Mario Odyssey or the like on sale for pennies anytime soon. At best, we can hope that some Nintendo games appear in the Humble Monthly subscription, but even that's a long shot. This is definitely something to keep an eye on, but at the moment, it seems kind of vestigial.

These are the 25 best Switch games you can buy right now.