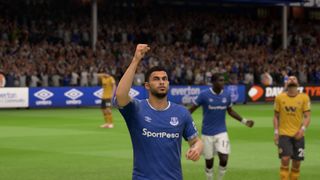 Rumours of late moves to Everton and/or Crystal Palace were ultimately unfounded, but one particular French midfielder saw his stock rise significantly over the summer transfer window – causing fans of both sides to take a major interest in the Morgan Sanson FIFA 19 stats spreadsheet. No doubt both teams will again test Marseille with January bids, but what would they be getting?

In FIFA 19, Sanson earned two Ultimate Team cards across the 2018-19 campaign: a base-level gold rated 80, and an 83-rated inform as part of the week 36 ‘Team Of The Week’ (TOTW). For the purposes of this feature we’ll stick with the regular gold card, which suggests that he’d be a great fit for both squads.

Palace have a wealth of options in central midfield but Sanson outperforms them all according to FIFA, including penalty king and captain Luka Milivojevic (79) and German import Max Meyer (79). He’d have much more competition at Everton however, with numbers that match Andre Gomes (also 80) but fall short of Gylfi Sigurdsson (82).

The standard Morgan Sanson FIFA 19 card is particularly intriguing because it features just three ratings above 79, and three below 70. He’s the very definition of a box-to-box all-rounder.

Creatively that means strong showings in long passing (83), vision (80), short passing (78) and shot power (79). But it also means he’s tidy at mopping up opposition attacks, earning 77 for interceptions, 71 for marking, and 76 for sliding tackle.

Those three ratings I mentioned in the sixties? Balance (69), heading (69) and penalties (68). Sanson’s all-important career mode potential is a tantalising 85. No wonder OM are so keen to hang on.

Over in Football Manager, our Marseille midfield maverick performs with similar aplomb across the full array of necessary attributes. Remember, however, that this is a game that judges players out of 20 rather than 100.

Morgan sings from a creative standpoint in FM, serving up 16 for passing, 15 for first touch, 15 for vision, and 14 for flair. 14 for determination and 16 teamwork also keep him ticking over in the engine room for a full 90 minutes.

The defensive stats aren’t so accomplished - 9 tackling, 8 marking, 8 heading - but he’s still a decent addition to any in-game Premier League side. Particularly those with the nickname ‘Toffees’ or ‘Eagles’.