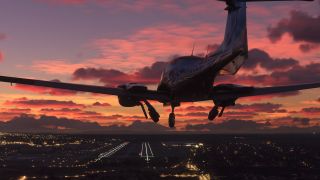 Microsoft Flight Simulator, the game(?) that uses satellite imagery and live weather data to let you virtually travel from your house to the grocery store in record time, is now accepting applications for its next alpha test. If you want to try out Flight Simulator on PC, you should sign up as soon as possible - Microsoft recently reopened alpha applications, and it plans to have all of its invitations for the next round sent out by Monday, January 27.

Signing up for the alpha takes more effort than just agreeing to some Terms of Service, but it will all be worth it once you're cruising comfortably at 30,000 feet. Head to the official website, click the menu icon in the upper right, and hit Insider Login. You'll need to sign in with your Microsoft account, then return to the website and click "Flighting Signup". Fill out the surprisingly thorough survey and submit a DxDiag file to attest to your computer's specs. No idea what that means? Don't worry, the website will tell you what to do.

Get all that done and you'll have a shot at playing in the Flight Simulator alpha. While you may or may not get in with the first wave, Microsoft says it will "regularly" invite new groups of players to get their hands on throttle and stick. Speaking of which, you don't need a full-on HOTAS setup to play Flight Simulator, even at this early stage. An Xbox One controller will do you just fine, but if you're really itching for the authentic experience you should check out our guide to the best controller for PC gaming.

Microsoft Flight Simulator doesn't have a full release date yet, though the word around flight control tower is that it will hit Xbox Game Pass sometime this year. Make sure you get your alpha sign up in ASAP if you'd like to hit the friendly skies before then.

See what else is on the satellite-imaged horizon with our guide to the best upcoming Xbox One games.