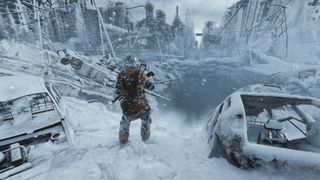 We're finally getting the hotly anticipated second and final Metro Exodus DLC next month. Titled "Sam's Story", it'll drop on February 11 for Xbox One, PS4, PC, and Stadia, and is reportedly a "sandbox-survival" expansion.

In the expansion, players will help Sam journey through Vladivostok and return back to the US, where he hopes to find his family alive. Keep in mind you should finish Metro Exodus before getting into the DLC (and maybe skip reading the summary of the expansion below). Based on the tweet, which bill's Sam's Story as the end of the journey, it's likely the last expansion for Metro Exodus, so you'll want to get your hands on it if you can.

According to the official post announcing the DLC, Sam is determined to head back to the US and find his family after discovering the Metro tunnels are not the only way of life in this ravaged world. You'll guide Sam away from the Aurora and towards Vladivostok's "tsunami-ravaged harbors, ruined industrial buildings, and crumbling residential districts." Expect tricky surroundings that will test Sam's training and tactics.

As of now, there's no trailer or price for Sam's Story, but the Metro Exodus Expansion Pass is $25 - which will get you the previously released expansion "The Two Colonels" and this upcoming one as well. The Two Colonels, which tells the story of Colonel Miller retracting Colonel Khlebnikov's final steps, can be bought on its own for $7.99, so barring any major difference in length, Sam's Story will likely cost the same.

If you haven't beaten it yet, but want to before you get into the DLC, here's how to get the good Metro Exodus ending.