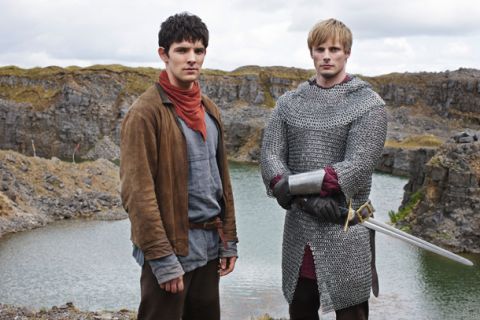 Keep the spoilers secret: that is the ancient creed by which the Great Dragon lives his scaly life. But still, every week, our young seeker of knowledge journeys to his cave to eke out what meagre information he can glean about the next episode of Merlin from the mighty (but, for some reason this week, slightly despondent-looking) beast…

“I’m typing up my CV. It’s not easy with these claws.”

“Yeah. They’ve cancelled the series . Lord knows why. And such a cushty job lately. I was only having to do one line a week.”

“Well, axed is a harsh turn of phrase. Axed usually means a show is failing badly. We have huge viewing figures. Bigger than Casualty . Much bigger. And that’s been going since I was an egg! Do they cancel that rubbish even though it’s haemorrhaging viewers? No. Instead we get cancelled because the show’s story arc has reached its ‘natural conclusion’. Well, my pension fund hasn’t reached its ‘natural conclusion’. But do I have a say in the matter? Of course not. I mean, I’m just the bloody Great Dragon.”

“What are you going to do?”

“I’m offering my services to other shows that might have me. Wizards Vs Aliens . Game Of Thrones … I can deliver prophecies in a northern accent if necessary! ‘Ey-oop, tere’s a reet grand battle coomin’ oop.’”

“Seriously, if you get an audition, don’t do that.”

“Ah, dear boy, for once I welcome the distraction of your weekly visit. It’ll stop me from brooding for a while.”

“Does that mean you’ll give me some proper spoilers?”

“Not likely. I still have a reputation to think of. In fact, to prove my worth I shall be more obscure than ever!”

“Elyan is used as an excuse. There’s some hand sniffing. Someone has Vulcan blood. The words, ‘A woman’ unexpectedly change everything. Merlin uses an old trick in a new way. And in an old way, come to that. Arthur is given some sage words of advice. A strategically placed loaf saves a loaf. There’s more cross-dressing, but there’s a good excuse. There’s a very big cauldron. Merlin gets to talk parseltongue again. Mordred plays an important role and makes a pivotal leap. Merlin borrows something to make a point. Gwen gets saddle-sore in a most unusual place.

“Okay, okay, okay! But anything more specific about what kind of episode it is?”

“It is a very important episode in lots of ways. The precredit teaser has a narrative leap quite unusual and unexpected for the way this show normally tells its stories. Refreshingly so. On one level it could be looked at as a standard quest episode but there are some very intriguing moments along the way. Colin Morgan gets to bring out yet another side of Merlin. The ending may be a little cheesy for some, but others will love it. There’s the potential for some very – VERY – broad comedy, but the episode never goes too far in that direction.”

“There’s some fantastic prosthetic make-up, a great gnarly old witch, a slightly disappointing location (you may go, “Is that it?”), a lot of people getting telekinetically knocked an appearance by one my brethren… Oh hang on!”

“She’s going to be competing with me for jobs! That’s yer lot. Time to get this CV finished.”

Merlin "With All My Heart” airs on BBC1 on Saturday 1 December at 8pm.