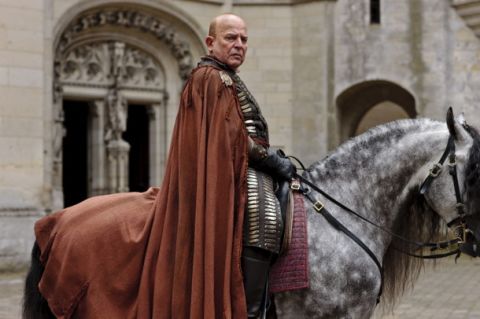 TV REVIEW With Merlin out of the castle on a wild goose chase, who will protect Arthur?

THE ONE WHERE Merlin leaves Camelot to help a young "druid" boy, but it's a trap ! Obviously. Morgana poisons him in the woods leaving Arthur unprotected and at the mercy of an assassin from Amata.

VERDICT Apart from filling in some gaps in what has happened to Morgana (at last we find out who was holding her) and giving Merlin a chance to get out from Arthur's shadow, this episode does surprisingly little in terms of the continuing plot arc. At the end we're left back where we were before - if you forgot to watch this episode you probably wouldn't have any trouble picking up the thread again next week. Those hungry for a substantial reveal will not be content, unless that tiny morsel of Morgana backstory satisfies. It also introduces but kills off two great new characters and falls back on the old trick of knocking a character out of action (in this case Merlin) due to poison and sickness.

Nevertheless there are some superb moments in it, the strands of conspiracy and betrayal adding a delightful tension; and I'm genuinely pleased that we're getting some information about what happened to Morgana. The Sarrum of Amata "once had her under lock and key" and admits "I kept her, like an animal". The baby dragon, who Merlin discovered was unwell back at the start of the series , was "crippled and twisted" because it had to grow inside the Sarrum's pit. It's a gross but moving detail and the Sarrum seems to revel in it.

Other characters are evolving too, albeit much more subtly. Arthur's role as king is now more layered, with him having to deal with a cruel regime in order to meet his political goals - even Gaius observes that Arthur's becoming quite the diplomat and statesman. Meanwhile Merlin's growing importance is revealed by the fact that Morgana realises she has to get rid of him in order to overthrow Camelot. [Nope, see discussion in the comment thread below.]

Ah, Gwen. After last week's murderous activities the queen remains on villainous form. It's chilling to see her smirking from an upper window as Arthur is bested during training and again when she says to the Sarrum, "I'd be happy if he died tomorrow..." I think Angel Coulby's character is more interesting when she's like this. She seems more determined and forthright and kinda charming when she's not just being an adjunct to Arthur. But the convenient shooting of Amata's king frustratingly ties up the loose end of their collaboration.

It's fun to witness Merlin away on a solo mission and out in the wild and what we see this week is a return to the badass who killed Agravaine last year . By the end of this episode he has a purpose and a mission again, and we're in no doubt that he will be ruthless in its execution. We're treated to an awesome moment when Merlin lets loose his sorcery on the bandits. ("You don't even have a sword." - "I don't need one.") and once back in Camelot he actually strikes the would-be assassin down dead. Colin Morgan's final look, that scene at the end in the royal couple's chamber, says he means business; surely a confrontation with Gwen is coming.

PLAY THAT FANTASY MUSIC If you're a Spotify user you can get the music from Merlin series three and series four right now. Why not listen while you read this?

LMAO There's comedy again this week, a mood absent for a while but re-introduced last episode. Gaius almost says "I don't believe it!" when Merlin explains that he'll have to make his excuses to Arthur for him; and it's followed up by some comedy banter with the king - helping the king get dressed is Gaius's silliest scene so far this year.

NITPICK If Sarrum is famous for impaling his prisoners, why did he keep Morgana alive in a pit and not just kill her?

HOP TO IT Daegal claims he was looking for frogs in the moonlight and Gwen attests she used to do that too. It is, in fact, a very old cure for toothache. The Romans used to catch frogs under the full moon, according to writer Pliny The Elder. They'd then spit in the frog's mouth and it would supposedly take the pain away.

HERBALISM 101 A few more plants and flowers get shout-outs this week, particularly when Merlin needs a cure for Morgana's poison. He asks the lad to find him rue ( ruta graveolens ) which he accurately describes as having "yellow flowers and feathery leaves" - it's a flower native to Mediterranean and Middle Eastern countries and it's used as a food flavouring, not typically as a cure for poison although they do use it in cough syrup in Brazil. Merlin also asks for millefoil which Daegal calls "yarrow" ( achillea millefolium ) - it's a common herb for healing wounds and can be an astringent as well as helping with bleeding and swelling. It was so popular on the medieval battlefield that it's sometimes called "soldier's woundwort" and its Latin name "achillea" comes from the belief that Greek hero Achilles encouraged his army to carry supplies of it. Earlier in the episode Gaius says that Merlin has gone looking for agrimonia (probably agrimonia procera or agrimonia eupatoria ) which was commonly used for intestinal or digestive disorders. The Anglo-Saxons also used it to heal wounds. Finally we hear about comfrey ( symphytum officinale ) which is a common European riverbank flower, but a controversial drug. It's allegedly good for healing sprains, ulcers and broken bones but apply it to the surface only please, don't ever eat this badboy - it can cause liver failure, and the United States Food And Drug Administration issues a very stern warning about ingesting it.

SLASH BAIT Arthur finds himself topless once again in this episode, just in time to end up in Gwen's nightdress thanks to a clumsy Gaius. We can presumably understand that Arthur can't even comb his hair or get his shirt on each morning without Merlin lending a hand. As Gwen is trying to dress him he cries "I want Merlin back! Where is he?!" No wonder he's annoyed when he thinks he might lose Merlin to a "poor girl" ("Really?! Merlin?!" he calls out when Gwen makes up a romantic reason for Merlin's absence). Merlin, however, has actually been bonding over apples and poultices in the woods with Daegal.

IT'S WOSSINAME AND ALSO THEM LOT The Sarrum is played by 70-year-old Shakespearean actor John Shrapnel. Fantasy fans will also know him from such things as Apparitions , Alien Autopsy , The 10th Kingdom and Troy . The swordsman and assassin Albin is played by Matthew Clancy and Daegal is played by Alfie Stewart - shame the boy snuffed it in "The Hollow Queen", I quite liked him, but his final moments were moving (I'm a sucker for a noble death). Meanwhile the leader of the bandits, apparently called Gerrin, was played by The Now Show 's Mitch Benn. Could last week's dig at Merlin really have been playfully aimed at him?

BEST LINE
Morgana: "You must promise me something. You must make sure the Sarrum's last moments are filled with agony."

Merlin airs on Saturday nights on BBC One in the UK. In the US it's heading to Syfy in 2013.