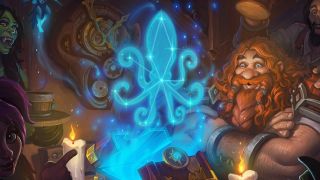 Dataminer and programmer Martin Benjamins might have discovered the newest World of Warcraft location, and it’s an homage to Blizzard’s free-to-play digital card game, Hearthstone. Benjamins posted a collection of his findings on his Twitter account, the most exciting of which is a tavern designed to mimic an inn, the central location of Hearthstone games.

Hearthstone, initially subtitled Heroes of Warcraft, is a free-to-play online collectible card game released by Blizzard in 2014. It’s an extension of the existing World of Warcraft lore, referencing the same characters, relics, and elements. The turn-based game offers players a choice between nine classes, each with its own strengths and abilities. As far as World of Warcraft canon goes, Hearthstone is played in-world at inns across Draenor and Azeroth, hence the addition of the tavern to the WoW Public Test Realm.

Benjamins posted a link to the WoW.tools model viewer that allows you to fully explore the tavern (fair warning, it’s slow to load), but so far it looks incredible. Atop a shelf sits the glowing blue swirl of the Hearthstone logo. There are swords and shields mounted on the wall, tall shelves filled to the brim with leather-bound books, an inviting fireplace and, of course, Hearthstone tables. These card-playing tables have been scattered throughout World of Warcraft before, but they’ve never been functional, serving only as a lovely bit of lore decor. No word on whether or not the tables in this Hearthstone tavern will be playable, but that would be an added treat, wouldn’t it?

As for now, Benjamins isn’t positive about the location of the Hearthstone tavern, but points to two potential spots: there’s an entirely separate map titled “hearthstone tavern” as well as a “stormwindhearthstone” reference on the Assault Stormwind map. Wherever it is, it’s sure to conjure up the bustling energy of a traditional Hearthstone inn, flagons of mead and all.