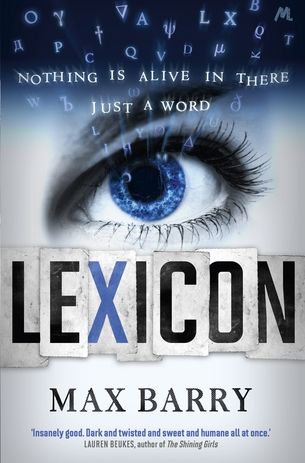 No, this isn’t a novel based on the card game that’s a bit like Scrabble. In fact, it’s a bit of a dull title. The premise doesn’t sound amazing either. It’s about an organisation of people with the skill to use words – ordinary, everyday words and secret, powerful words... yes, magic words, essentially – to influence and control people.

But this scenario is brilliantly realised. Max Barry builds up the idea of “magic words” so rigorously, and draws in so many concepts from psychology and how we use language, that it seems like a new idea, rather than one of the oldest fantasy concepts there is. By matching it to the information age it seems strikingly relevant - we really are at risk of being manipulated due to the amount people know about us.

But all this stuff, fascinating though it is, merely adds depth to a compelling thriller. There are two threads: one in the recent past, following street hustler Emily Ruff as she’s brought into the organisation; the other in the present, as a man named Wil Parke is abruptly drawn into this dangerous world, and forced to return to the scene of a disaster he doesn’t even remember experiencing.

Emily in particular is a complex character, sympathetic but sometimes frustrating: it’s the way that her journey as a character meshes with the unfolding of the plot that makes Lexicon such a resounding success.