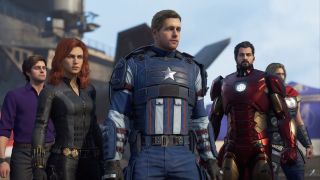 Marvel's Avengers full achievement list has leaked ahead of its September release date, revealing a number of major story spoilers from the action-adventure game's upcoming campaign.

As reported by Exophase, the entire list of Marvel's Avengers achievements appeared online yesterday, presumably since Crystal Dynamics' title was originally meant to launch in May, before being delayed at the last hurdle.

Before we discuss the major revelations from this leak, though, consider this your final spoiler warning...

Ok, let's start off with the big one. The very final achievement for Marvel's Avengers, "New Girl Makes Good", reveals that MODOK and the Kree are set to play major roles as the campaign's primary villains, with the former presumably working behind the scenes as a puppet master to the A-Day attack seen in the game's opening moments.

The "A Novel Way to Travel" achievement also confirms that The Inhumans will also be appearing in the story, though it's unclear if the cosmic superhero group will merely be supporting cast members to the core Avengers team, or fully playable characters.

Finally, in what will come as a surprise to no-one, a trophy titled "Welcome Back, Old Friend" reveals that Captain America isn't dead after all, despite Crystal Dynamics making a huge deal about his apparent demise in the game's opening demo. I know, right? Shocker.

The rest of the achievement list either confirms a few other minor story beats that we already knew about or alludes to Marvel's Avengers progression system and gameplay, but - nevertheless - it's a pretty major leak for one of the biggest upcoming games of the year. One can only hope Crystal still has more secrets in store for us beyond what's revealed here.

For more, check out the biggest new games of 2020 and beyond still on the way, or watch below for our hands-on impressions of Marvel's Avengers.