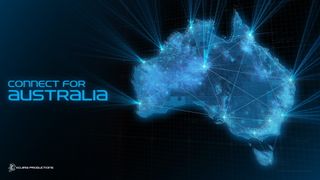 Death Stranding can't support Australia by smashing the Like button, but it can donate the proceeds from some new pieces of merch to a worthy cause.

Kojima Productions has updated its official store with two new Death Stranding products: a T-shirt for you and an avatar for your PlayStation Account. Both show the same graphic:  Australia outlined in the blue holographic display technology of Death Stranding, with connections between its major cities and the rest of the world. Strands, you might call them. The words "Connect For Australia" drive home the feel-good purpose of the merchandise.

The shirt costs $25, and while you can get the avatar for as little as $1, you can also choose to donate more if you prefer. Kojima Productions says all of the proceeds from the fundraising merchandise will be given to the Australian branch of the Royal Society for the Prevention of Cruelty to Animals.

The RSPCA of Australia says it's currently working to help members of the public keep their animals safe, as well as providing equipment, supplies, and boarding where possible. As more fire zones clear, the society "will begin the difficult job of entering affected areas to identify and assess injured animals," with its work planned to continue for months after the last fires are extinguished.

The effects of the historical Australian bushfires will be felt for years and years to come even as firefighting efforts and flood-bringing rains quell the worst of the disaster. Death Stranding is filled with freaky invisible monsters and fetuses in pods, but it still has an uplifting message of connection and collaboration all across the human race. It's nice to see Kojima Productions stand behind that message in real life too.

Sony's also planning to benefit Australia, with Naughty Dog, Shuhei Yoshida, and more all lined up for charity streams this month.