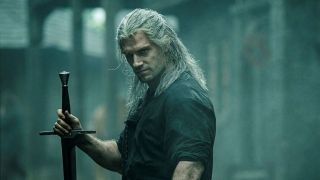 There's a moment in The Witcher Netflix series premiere that immediately sells the series: the Blaviken battle. It feels so heavy, fast and dangerous; like these are not actors wielding swords, but warriors swinging blades that weigh several pounds – anyone could lose a limb at any moment. Now, we've got a video of Henry Cavill breaking down that fight scene, from the single-take first battle with Renfri's crew to the dangerous (and heartbreaking) dance with Renfri (Emma Appleton). Check it out.

Henry Cavill is a complete dork when it comes to both The Witcher and sword fighting, which makes this video a gem from the start. He notably does all of his own stunts throughout the series, which means he had to work closely with fight coordinator Wolfgang Stegemann to choreograph and practice such incredibly technical scenes.

Some scenes include fighting with cut-off swords, which Cavill says are used for "particularly complex or technical pieces, or pieces which may be very, very dangerous." Head to 1:05 to see a shot that would have been pretty damn dangerous with a full sword. Half-swords "allow for a lot more moves to be done which involve blood and gore" but are incredibly difficult to use, as the actors and stunt people "have to perform like the sword is full length."

The battle between Geralt and Renfri's thugs was all done in one take, so cut-off swords had to be used throughout. Yes, this wild scene is all one shot, and if that doesn't geek you out, I'm not sure what will. "The problem with a one-shot scene is that if any bit slows down, or if anything doesn't work perfectly, it ruins the whole scene," Cavill says, "There's no time for mistakes, there's no space for mistakes."

After Geralt disposes of the band of fighters, Renfri appears, and the tone and pace of the battle changes completely. It's beautiful. "Wolfgang and I really wanted to make sure that the story was told through the fight," Cavill points out, "It's not just a random fight... these are two people in a dance and through that dance a story is told."

This deadly dance required Cavill and Appleton's stunt double Lucy Cork to move "less than an inch away from each other's heads." He describes Cork as "the best stunt performer I've ever performed with," and I'm going to avoid making a joke here because she is also Cavill's real-life girlfriend (they met on the set of Mission Impossible 6). Here Cavill shows his love for the Witcher novels, describing Cork's movements as "viper-like" and pointing out that she fights exactly how Renfri (or Shrike, he reminds us) is described in the books.

"It's a true dance," Cavill says, "It requires a lot of patience, and a lot of skill." That skill is why professional stunt fighter Cork stepped in for Appleton, who trained for weeks leading up to the shoot. "There was only so much one can do to actually build up to a fight which was this technical."

"I hope you enjoyed it," Cavill says at the video's finish, "I hope I wasn't too detailed - I tend to get a little excited about these things." Be still my beating heart.

Longing for more Witcher in your life? Then check out everything we know so far about The Witcher season 2.