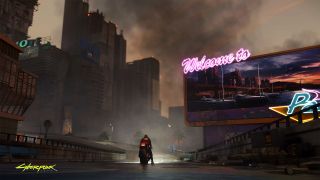 Developer CD Projekt RED had remained steadfast in its determination to get Cyberpunk 2077 on shelves for April 16, 2020. It always seemed pretty unlikely that the studio would hit that date, but still we dared to dream. Still, the closer we inched towards that release date from the initial announcement at E3 2019, the more that decision began to feel like a more ambitious endeavour than anything that the game itself could ever hope to deliver. And that's saying something, because Cyberpunk 2077 looks like it has the potential to redefine the RPG.

It's the kind of game where the holy trinity of video game descriptives can be thrown around and not immediately sound like half-baked hyperbole: immersive, detailed, and dare I say cinematic. Because Cyberpunk 2077 does look impossibly immersive, with CD Projekt RED promising an unfathomable level of player choice, flexibility, and responsiveness throughout each and every one of its interlinked systems and artificial intelligence routines. Because it does look demonstrably detailed, offering a degree of depth and density in its world design that could immediately put Night City in league with such iconic locales as City 17, Dunwall, Rapture, and Von Braun. Because Cyberpunk 2077 does indeed look awe-inspiringly cinematic, its design allowing seamless transition between each of the world's six sprawling districts and the multitude of the complex quests contained within them. Considering all of this, perhaps it was never a question of if Cyberpunk 2077 would be delayed, but rather a question of when.

Given all we know about Cyberpunk 2077, we should all be happy to wait for CD Projekt RED to deliver on its creative vision. Should that even be possible.

Understanding the complexity of Cyberpunk 2077

"It's like trying to put a jigsaw puzzle together," Patrick Mills told me earlier in the development cycle, the CD Projekt RED quest designer struggling to convey just how much of a monumental undertaking Cyberpunk 2077 had been for the studio since it entered pre-production back in 2012. "But it's like the pieces of the puzzle keep changing shape as you place more of them in, and even as it keeps falling apart you know you have to get it done eventually – hopefully we will wind up with something that makes sense and is coherent," he says, laughing. "It's a lot of work and a lot of revision."

When CD Projekt's co-founder Marcin Iwinski and studio head Adam Badowski announced that Cyberpunk 2077 would be delayed to September 17, 2020 this week, the pair – speaking on behalf of the company – remarked that "we are currently at a stage where the game is complete and playable, but there's still work to be done. Night City is massive – full of stories, content, and places to visit, but due to the sheer scale and complexity of it all, we need more time to finish playtesting, fixing, and polishing."

It can be difficult for us, as players, to really conceptualise what that "scale and complexity" really means – and what "playtesting, fixing, and polishing" really entails. Game development is effectively the convergence of multiple artistic and engineering proficiencies, where hundreds (if not thousands, in the case of some AAA productions) of people must come together to collaborate on a vision that is forever shifting and twisting.

Big in 2020: Cyberpunk 2077 will give us a glimpse into the next generation of RPGs

It's a process of constant problem solving and damage mitigation. This is, of course, all anecdotal, so let's listen to Mills as he shares a story from his time in the trenches of development on CD Projekt RED's previous game, The Witcher 3: Wild Hunt, to get a better sense of just how complicated development on games of this scale can be.

"There was a mission in The Witcher 3 where you were supposed to ride your horse and attack somebody from it, but it didn't work at the time because horse riding hadn't been implemented in the game. And since horse riding didn't work, you definitely couldn't fight on the back of the horse. We knew we were going to get [horse riding] it, but we didn't know when. So we had to go through a lot of work just to fake doing that," Mills told me at the time , explaining that work cannot be halted just because certain systems, mechanics, or features are still in development. "That could take us two weeks to do and then, when you eventually get the system, in an ideal situation, you would just take your thing out and put the new thing in."

"It never works that way. What happens is you take your thing out and you put the new thing in and then a dozen other things break because they relied on the fake thing that you put in. That goes right up to the end of the project and, even in the patch process, you're constantly tweaking things."

There's a long way to go

That's game development for you. And here's the thing, that's just one example of a gruelling iteration process from The Witcher 3's development of countless others. The Witcher 3 was delayed on numerous occasions, and it's this cycle of planning, implementation, testing, and iteration that ultimately held it from hitting its original launch dates. Oh, and here's the other thing: The Witcher 3 isn't nearly as complex as what CD Projekt RED is attempting to do with Cyberpunk 2077. Let's put aside the fact that this is the studio's first first-person RPG, and that it's the team's first stab at science fiction, and that the game is generally moving at a speed that would likely give Geralt debilitating motion sickness. Instead, consider how Cyberpunk 2077 is built on the foundation of player choice, that the lead character V is designed to be malleable; as a class-less video game, Cyberpunk 2077 is letting us play a protagonist that we will have the space to truly shape. That presents a whole new challenge for the studio.

"The first challenge is that this is different compared to what we've been doing so far. For example, this requires us to change the way we think about how we design dialogue," Marcin Blacha, story director on Cyberpunk 2077 told our sister publication OXM. "We essentially knew what Geralt would say in a given situation. Lore-wise, he often chose to be neutral, but deep down inside we all knew he was this warm and likeable guy (who could get the job done). Here, we need to ask ourselves how you would behave. And we can only assume who you are and what makes you tick. Is your V a ruthless pro who cares only about the money? Or maybe someone centred on trying to fix everything wrong with this world? We need to cater to what you'd want to do and try to predict what any V would say in a given situation."

Take that and remember that this complexity is compounded by the latitude the quest design is hoping to support. If you can shape V so liberally, how does CD Projekt RED ensure that every player can make it through each of the missions, quests, and combat encounters without encountering a wall halting progression. "What we want to do for our quests is we want to make sure that anybody can get through them," Mills told me. "So we have to consider, 'okay, what if a player is coming in and hasn't spent any skill points, and hasn't purchased any upgrades. Can they get through it?' They have to be able to play it that way, if they want to."

What does a five month delay earn CD Projekt RED? The time and space to properly playtest this thing – or, if we are being realistic, the opportunity to playtest it as much as possible. "QA [Quality Assurance] is enormous. It would be possible without a QA department. We thankfully have a very good one," Mills continues. "They have testing sheets and will say, all right, we've got your different test characters; there's the test character who has no abilities, the test character who has all the abilities, the rest character who has all abilities in one tree or another tree, and another one…" this goes on for a while, but it just goes to show how much thought CD Projekt RED is putting into getting this right – and that takes time. "[QA] is trying to figure out how many ways you could play it, and then they will make spreadsheets that will show 'okay, this build can't make it through the quest' and then we need to go back in and fix it. There's a lot of play testing… lots and lots of play testing and lots of iteration."

Following the Cyberpunk 2077 delay, CD Projekt held a conference call with investors in which it confirmed the game has been playable for start to finish for months now, but there was still a lot of work to be done. Of course, nobody out of the studio ecosystem has had the opportunity to play the game yet – be it media or players. We're yet to see what shape the game is in, or whether it will reach the benchmark set by those impressive public demonstrations.

We likely won't get a better sense of that for some time, either. Given everything we know about the game, it's likely that this is going to take some work – and crunch – on the part of CD Projekt RED's development and testing teams. The studio has said as much in that conference call, with joint-CEO Adam Kicinski revealing that "we try to limit crunch as much as possible, bit it is the final stage. We try to be reasonable in this regard, but yes. Unfortunately."

I said right up top that it wasn't a question of if Cyberpunk 2077 would be delayed, but a question of when. Instead – given the work the team has to do in the coming months – maybe the better question should have been for how long? I'm speaking for myself here, but I'm happy to wait for as long as it takes if it means that the team is given the opportunity to get this right without working itself to the bone. Cyberpunk 2077 was always going to release when it was ready; that is, after all, what the studio maintained its objective would be from the very beginning.