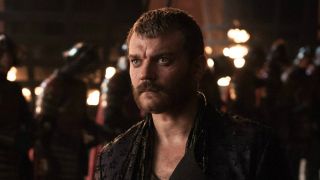 The actors of Game of Thrones season 7 may be allowed (relatively) normal lives but that doesn’t mean when and where they show up can’t be the focus of some little bird-style whispers. Take Nikolaj Coster-Waldau and Pilau Asbaek, for example. They attended a sporting event last year which could actually shed some light on where their characters might be headed next. Confused? Allow me to explain…

Jaime Lannister and Euron Greyjoy have an interesting photo doing the rounds on the web at a football/soccer (delete as appropriate) match between Sevilla and Barcelona at the tail-end of last year. Enjoying time off from filming is one thing, but enjoying it just minutes away from Real Alcazar de Sevilla, a royal palace in Seville that stands in for much of Dorne’s scenes, is another, as one astute Thrones fan pointed out.

Dorne scenes were/are filmed in the Alcazar de Sevilla, so given this, I guess we'll see Jamie & Euron in Dorne https://t.co/9dOvVdamOT3 August 2017

So, will Euron and Jaime rock up in Dorne? You’d think their storyline is done and dusted (thank God) with the deaths of Ellaria Sand and the three Sand Snakes but, as we’ve come to expect in Game of Thrones, a power vacuum in a large kingdom is a dangerous proposition. That leaves a couple of possible scenarios: the Dornish could be potential allies across the sea or, if they refuse to bend the knee, just another loose end that needs tying up. I’m seriously hoping for the latter.

If nothing else, we’ll probably get Euron being a big bully, kicking sand in faces, and Jaime finally getting proper closure for the death of Myrcella.