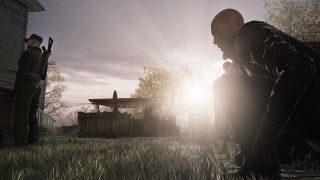 Hitman is headed to the Rocky Mountain State on September 27. I'm pleased that IO Interactive picked a very American kind of target for its lone American mission: the heads of a home-grown Colorado militia. He'll have to kill all four of them before he can put the private compound in his rear-view mirror.

The previous four episodes all let 47 explore distinct locations around the world, which ranged from swanky to riotous but were all fairly metropolitan. This time the contract killer is out in the boonies, with more open spaces to walk slightly-too-quickly through and fewer washrooms to hide bodies in. On the plus side, all that open air means this (fictional) slice of Colorado should be a sniper's playground.

Hitman Episode 5 will include the usual collection of new opportunities and disguises, and you can take the new gear you earn from completing its 70 challenges back into other episodes. That includes Japan, the site of the sixth episode which is set to arrive later this year.

IO Interactive is still being very cagey about where the seventh and final episode will take place. My theory is that it will add new stuff to the previous six locations. And it will likely arrive before the game's complete retail version, the latter of which is due on January 31, 2017.