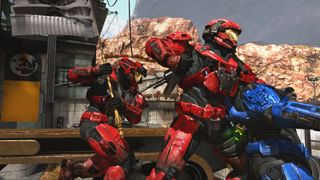 While Halo: Reach originally launched back in 2010, the new PC version adds updates like a battle pass system that uses season points to unlock armor, cosmetics, Firefight voices and more. There's a host of new settings and shiny new rewards that aims to keep things fresh for both series’ veterans and newcomers alike until Halo: Combat Evolved Anniversary, Halo 2: Anniversary, ODST, 3, and Halo 4 unlock in 2020.

If you want to know how to get Halo: Reach season points and unlock armour, then make sure you check out our handy guide below.

How to unlock armour in Halo: Reach

If you want to unlock Halo: Reach armor and the game’s various cosmetics then you’ll be relieved to know that you can earn everything in-game simply by playing the game. To see what each cosmetic looks like and what rank you need to unlock it, simply click on the “Options & Career” button, then head over to the season you wish to view. From here, you’ll be able to see all the cosmetics that can be currently unlocked.

There are a whopping 100 tiers available in the Halo: Reach battle pass, so you’ll need to do a lot of grinding if you wish to gain access to every single piece of Season 1 armour. Each cosmetic costs a total of one season point, making later unlocks a rather time-consuming affair, especially if you wish to get every piece of armour the game has to offer.

How to get season points in Halo: Reach

If you want to kit out your Spartan with the coolest looking armor and gear, then you’ll need to earn season points in Halo: Reach. Fortunately, season points are incredibly easy to get and can simply be earned by levelling-up your player rank. Everyone starts their journey as a fresh-faced recruit, but you’ll naturally fly through the ranks the more you play.

Of course, you’ll gain more experience points depending on your overall performance, kills, medals obtained, and objective-based play. We recommend playing Big Team Battle game mode as the 8v8 nature of these matches will allow you to go on bigger killing sprees, while also giving you access to lethal power weapons that make picking up those all-important multi-kills that much easier. The hectic nature of these game modes can take a little getting used to, but the amount of experience you gain is worth the added intensity.

Once you have enough experience points to level-up, you’ll be rewarded with one season point which you can spend on the game’s cosmetics. Unfortunately, you can’t choose which piece of armour to unlock, so be prepared to grind those levels if you want to gain access to a specific piece of gear - obtaining the end of season rewards can take a lot of time.

Despite the overall grind involved, Reach’s battle pass doesn’t actually reset at end of the season, giving players plenty of time to grind out those levels needed to gain whatever cosmetics they wish to work towards. As of writing, there’s no other way to gain specific armour pieces in Halo: Reach, so you’ll be able to unlock the cosmetics you want no matter your overall skill level. Of course, the amount of experience you gain in each match will be greatly impacted by overall performance, so don’t be afraid to unleash your inner pro and take advantage of the influx of new players. Halo: Reach may not be the newest title in Bungie’s beloved space shooter series, but that doesn’t make it any less fun. With plenty of new seasonal cosmetics, custom maps and numerous game modes, there’s never been a better time to jump back into the action.