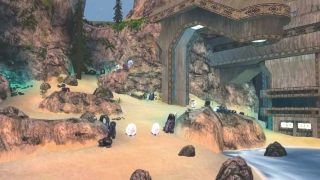 343 Industries says it's planning to bring the PC version of Halo: Combat Evolved Anniversary into public testing in January.

Referencing Halo: Combat Evolved Anniversary, 343 wrote in a blog post that "If work continues on its current trajectory, we are looking good to start flights in January," reminding the Halo community to sign up to the Halo Insider program. "Flights" is how 343 refers to alpha testing, which is only available to Halo Insider subscribers.

Halo: Reach released on PC this month as the first in The Master Chief Collection chronologically. Halo: Combat Evolved Anniversary is the next in line, to be followed by Halo 2: Anniversary, Halo 3, Halo 3: ODST Campaign, and finally, Halo 4. 343 Industries expects to have each of these games available to PC gamers in 2020.

If you've been playing Halo: Reach on PC and suddenly found yourself locked out, you might've been banned. 343 says they're dropping the "banhammer" for a variety of reasons to ensure "that players have a positive, fair, and safe experience playing MCC online." The studio highlighted three ban-worthy offenses, which you can check out below:

With the rest of the Master Chief Collection coming to PC next year, it's an exciting time to be a gamer. Here are the best upcoming games of 2020 and beyond.