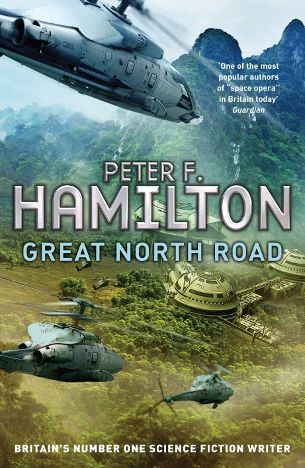 Even purveyors of massive multi-volume space operas have to take time out. However, everything is relative. Peter F Hamilton’s latest novel may be a standalone tale (although there’s plenty of scope for sequels), but it’s a thuddingly imposing 1,100 pages in length.

Not that it seems that way when you’re reading it. Balancing a multi-stranded plot, different exotic locales and a huge cast of characters, Hamilton plunges us straight into a murder mystery set in a near-future Newcastle, a city now adjacent to a portal to another world, the tropical St Libra.

The victim is a member of the North clan, a billionaire family largely made up of clones. The killing bears uncanny resemblances to the earlier slaying of a North and his household. Could it be that Angela Tramelo, who was convicted of the earlier murders and currently languishes in jail, was telling the truth when she spoke of an alien attack?

Doling out its revelations slowly enough to keep the tension high without slowing the story, Great North Road builds confidently towards a conclusion that’s arguably a little too neat, but that doesn’t lessen the achievement here. We’ve said it before, but few SF writers handle BIG books with Hamilton’s aplomb. Furthermore, there are signs that Hamilton’s characterisation, sometimes a weakness in the past, is improving. In particular, both Tramelo and under-pressure detective Sid Hurst are well drawn and likeable - although Hamilton’s protagonists don’t half grumble about middle-aged concerns such as the kids disturbing rest-day lie-ins...

Read our review of Manhattan In Reverse by Peter F Hamilton.
Read more of our book reviews .