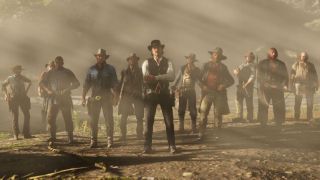 Hankering for a heaping' helping of the Old West? Can't wait to explore a ridiculously massive open-world game? We've got just the deal for you, but only if you're an Xbox One owner for now, it looks like.

It's a small price to pay for the game we awarded 5 out of 5 stars, calling it "the best looking console game there's ever been" and praising it for "easily" having one of the most surprising stories in the history of open world gaming.

"Just how good is Red Dead Redemption 2? Over the past few years, I’d argue the only games that deserve to be considered at this same ultra elite level are GTA 5, Metal Gear Solid 5, and The Witcher 3. This is a stone cold 5/5 classic that combines brilliant writing – Rockstar’s Houser brothers deliver another affecting, scythe-sharp script – amazing tech, and one of the most boldly structured plots to ever grace a triple-A title."

In addition, you'll get the original Red Dead Redemption: Game of the Year Edition, which includes the Undead Nightmare DLC, so you can experience the saga from the beginning and see where things go from there. Dozens of hours of gameplay for less than the price of one Nintendo 3DS game? Go ahead and pull that trigger.

If you've already had your fill of the Wild West and want to see what else the Xbox One has to offer, check out the best Xbox One games out there and start building your collection.