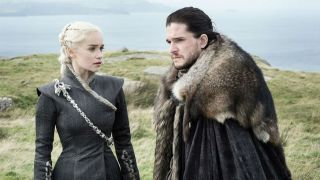 With what went down in Game of Thrones season 7, episode 4, you’d be forgiven for thinking every image from next week’s offering – Eastwatch – is just characters waking up in cold sweats. It was intense. And then some. Thankfully, though, the fine folks at HBO have given us a bit more than that, as major players survey the fiery aftermath from last week, as well as start plotting another big assault. There’s just no let up in Game of Thrones season 7.

The eight images are full of sly looks and furrowed brows (and that’s just Varys!), with Tyrion in particular looking pretty torn. Your big brother going for an impromptu dip to the depths will do that to a man.

We saw Dany looking fearsome in the preview for Game of Thrones season 7, episode 5 but, as they say, pictures paint a thousand words. Those words are probably the Lannister army screaming ‘Help me’ 500 times.

The beauty of dragons (and the showrunners kinda getting lazy with geographical distance this season – not that I’m complaining) is that Dany can be in two places at once in a single episode. Here she is with a broody Jon – he’s always bloody brooding, let’s face it – and there’s even the King of the North having what looks to be a dramatic hissy fit worthy of a two-year-old. Plans not going his way, perhaps?

Plots are a-brewing in the Dragonstone War Room, too. Varys is looking pensive with a White Walker threat on the horizon and, interestingly enough, he’s in discussion with Tyrion in the Dragonstone throne room. Are they going to be in open rebellion against Dany? That ties in quite nicely with this Dany betrayal conspiracy theory.

Elsewhere, Sam and Gilly are back – and Sam is typically up to his eyeballs in the literature of the Citadel. Poor thing. Cleaning up mess was one thing, reading is another. Ugh.

Finally, Cersei is looking none-too-happy sitting on her royal bed. Jaime is absent – and who knows what else – and the Queen of the Seven Kingdoms has probably just had the news relayed to her. The Targaryen/Lannister pendulum keeps swinging back-and-forth. Will Eastwatch mark another victory for the Lannisters?