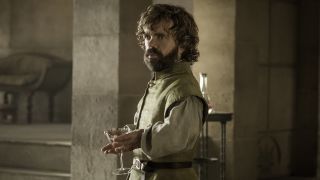 Time and again, Game of Thrones has proven that their small screen battle sequences are second to none. Indeed, thanks in no small part to increased budgets, they have only gotten better and better with each passing season. Not every big fight sequence from the book made it to screen though, and on the UFC Unfiltered podcast showrunners David Benioff and Dan Weiss revealed one particular scene they were forced to cut back in season one:

"Thinking back to season one, there was supposed to be this big battle. Tyrion Lannister follows The Mountain into combat - and we were really excited. We were going to have the camera at Peter Dinklage's eye level and have him follow this giant, The Mountain, into battle and just see everything".

"Frankly we just run out of money and we couldn't do it", they continued. "So that was one of the big battles from the book that we hoped we could get on screen and we never managed to do it".

It's a real shame this scene was cut; Watching a brutal, close quarters fight from Tyrion's viewpoint is an inspired idea, especially when you factor in the size difference between Peter Dinklage (4 feet, 5 inches) and Conan 'The Mountain' Stevens (over 7 feet tall). There are likely plenty of big battles in Tyrion's future, so with any luck we may yet see a scene like this in Games of Thrones' final seasons.