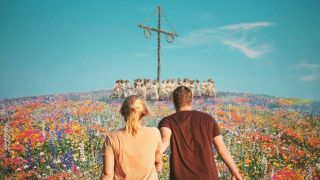 Ari Aster's Hereditary follow-up, Midsommar, explores the world of cults as a young couple on a Swedish road trip discover that a quaint local festival may be much darker than the flower garlands and communal feasts they first find.  We know we can expect the unexpected from filmmaker Ari Aster – who among us thought the sis-with-her- head-out-the-car-window moment was going there in Hereditary? So it's little surprise that his follow-up swerves a hard-left turn with a story he describes as "Scandinavian folk horror".

This feature was first published in Total Film magazine. For more just like it, don't forget that you can subscribe to Total Film to get the mag delivered straight to your doorstep or inbox every month.

Dani (Florence Pugh) and Christian (Jack Reynor) play a road-tripping pair who decide to attend a Sweden festival that only occurs every 90 years. But, of course, that's not all that's going on. Aster has described it as "a break-up movie that devolves into something much more sinister", and promises "generous amounts of psychedelia". Though he admits there's no supernatural pant-dampening at work here, we can expect to be as terrified as by Hereditary with macabre Pagan practices coming to light as Aster taps into a legacy of film horror set in cults, as well as real-life groups that have dominated headlines.

Creepy AF – but how accurate is Hollywood's representation of outlier groups with specific belief systems? Are they really as prevalent or as powerful as we fear? We asked Rick Alan Ross, a court expert on cults and author of Cults Inside Out: How People Get In and Can Get Out, to de-programme us on some of cinema's most coercive cults.

There are mild spoilers ahead, so proceed with caution.

BELIEFS: A remote Hebridean community, the Summerisle members follow Pagan rituals that include May celebrations and sacrificing a virgin fool with the power of a king to reverse the failure of their crops. Virgin bobby Sergeant Howie (Edward Woodward) is just the ticket when he arrives to investigate a missing girl...

REALISTIC?: The OG of cult movies that put the willies up generations by mining townie fears and suspicions of isolated rural communities, The Wicker Man may be a 'cult classic', "but it's not based upon facts relevant to destructive cults", according to Ross. "Neo-Pagan and Wiccan groups are typically benign and generate few serious complaints, though they are often the focus of conspiracy theories and denigration due to their unorthodox beliefs within Western society, which is largely dominated by Christianity." And while both The Wicker Man and Midsommar show cults that seem to have a large number of young women, this demographic is not disproportionately represented within destructive cults. "The largest single demographic of cult involvement remains at 18-26, though it is sliding upward as young people stay longer. Young people are often targeted, for example online or on campus, because they are less set in their beliefs, more open and willing to listen to new ideas."

BELIEFS: This Catskill Mountain commune group living on a rambling farm seems hippy and sweet, except the men are served by the women and figurehead Patrick initiates newcomers via drugging, rape and inciting killing (of cats and/or humans). Martha (Elizabeth Olsen) is re-christened Marcy May but is shocked into escape when the group commit burglary and murder. She suffers PTSD during her post-flight decompression.

REALISTIC?: "This film is chillingly accurate," according to Ross. "PTSD is typical for many former cult members, who may experience difficulties for years after leaving. Certain things may trigger flashbacks to their former life. Education is the key to recovery. Former cult members need to understand what happened and unpack their experience. This can be done through independent research and reading, plus is greatly assisted by counselling provided by a licensed mental health professional who has worked with former cult members and understands their issues. Finding a support group and talking about common shared experiences may also be helpful."

BELIEFS: A group of Satanists living in a NY apartment building contrive to create the devil's spawn by drugging and raping new tenant Rosemary Woodhouse. Feeding her tannis root to keep her docile and incapacitated, the cult cultivate her pregnancy and sedate her during labour...

REALISTIC?: "Satanism has been hyped beyond belief," says Ross, pointing to a period in the '80s called the 'Satanic panic' when a large number of accusations were made about Satanic rings in the US. "Satanic ritual abuse claims were proven false and many people were falsely accused and criminally charged. We are still sorting this out as some of the victims falsely imprisoned are only now experiencing vindication and justice. Rosemary's Baby plays into the worst paranoia about Satanism and, though entertaining, is little more than a contrived conspiracy with little similarity to the real world of destructive cults. I have received very few genuine complaints concerning Satanism."

BELIEFS: A group of Thuggee worshippers of Kali kidnap local kids in Mayapore, northern India, and keep them captive in a cave system as mining slave labour in pursuit of two sacred stones. They practise ritual human sacrifice by tearing out victims' hearts while still alive, then lowering them to their burning death in molten lava. Until Indiana Jones discovers their underground lair...

REALISTIC?: Not the fantastical heart-ripping and BBQing, but children are often part of cult groups and Ross has dealt with minors through his work with the US court system. "Minor children can be involuntarily 'deprogrammed' legally under the direct supervision of their legal guardian. I have done cult interventions with many children, often working with parents, legally empowered authorities and/or local children services. Unlike an intervention with an adult, which must be with consent and cooperation, an intervention with a minor child can be done legally without the child's consent. Other than that the intervention process is the same, though the discussion may be simplified to make it more easily understood depending upon the age and education of the child."

REALISTIC?: Ross was a technical consultant to Keitel on the film. "Cults were used as a backdrop for character-driven conflict between a strong woman and an egotistical man. Harvey wanted his character to be as authentic as possible within this context. In many ways, his character is accurate. He is a former cult member, which reflects the background of quite a few cult de-programmers." Though the intervention process is realistic, Ross is keen to stress that P.J.'s romantic/sexual interest in his client is not, as this "ignores the boundaries of his work, is totally unethical and represents a breach of genuine intervention process". The idea of travellers finding cults in India isn't so far fetched. "Many travellers have visited ashrams in India and stayed much longer than they originally planned, e.g. Osho, aka Bhagwan Shree Rajneesh. Though more often today many groups recruit online and then essentially reel people into their compounds rather than rely upon a less planned visit or happenstance."

BELIEFS: Followers believe their leader Maggie is a time traveller from 2054 and they are the chosen few who will be prepared for the terrible future to come. Among them are undercover documentary- makers Lorna and Peter. Part of the process for joining the cult is a series of challenging psychological tests and enforced vomiting to prove loyalty.

REALISTIC?: "Destructive cults put people through a process of coercive persuasion, which has three basic steps as defined by MIT's Professor Edgar Schein in his seminal book Coercive Persuasion," explains Ross. "These are unfreezing (breaking people down), changing (downloading the programme or desired mindset) and then refreezing (controlling socialisation and environment to reinforce the programme). Hazing and painful rituals can be seen as part of the breaking process.

BELIEFS: Occult followers believe their leader is locked in the body of the teenage granddaughter of one of their coven members. The cure for that is a bit of beheading. A little thing like dying won't stop the worship...

REALISTIC?: Levitating and piano-wiring yourself, maybe not. "The occult, neo-Paganism, Wicca, witches, Santería, Voodoo and so on are often unfairly and falsely depicted for the sake of sensationalism. These belief systems in my experience are most often benign," Ross says. But some cults do entertain death as part of their calling. "Death is preferable to life for some failed cult leaders, such as Jim Jones, David Koresh and Marshall Applewhite. These leaders essentially believed that death was better than what lay before them and they wanted to take their followers with them. This can be seen as the ultimate expression of malignant narcissism. The followers may be forced, either physically or through coercive persuasion, to accept death. Some were murdered, while others were led to believe they would be immortalised and/or were moving on to a better place."

BELIEFS: Religious movement The Cause helps followers find calm via 'processing' – a deconstructing system of psychological questioning. The group appeals to drifting WW2 vet Freddie Quell (Joaquin Phoenix), who takes personal exception to any criticism of the cult.

REALISTIC?: Yep. "The single most salient feature of a destructive cult is a charismatic leader who has become an object of worship," says Ross. "This leader is authoritarian, controlling and most often has no meaningful accountability to anyone. Whatever the leader says is right is right and whatever the leader says is wrong is wrong and the essential belief in the group is typically 'the ends justify the means'." Quell's vulnerability to recruitment is also spot-on. "People that are going through difficulties in life are much more vulnerable to cult recruitment than people who are happy and content. It could be a failed marriage, grief, persistent fears based upon a past trauma or something bad that represents a crack in someone that the group or leader can more easily penetrate through and gain control."

This feature first appeared in Total Film. For more excellent features like the one you've just read, don't forget to subscribe to the print or digital edition at MyFavouriteMagazines.