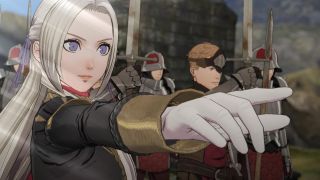 While Fire Emblem: Three Houses is taking the JRPG series in a new direction with its Harry Potter-esque premise, many familiar features and mechanics will be returning when the game releases in July. A recent feature in the Japanese magazine Famitsu, which was translated by Resetera users, showcases new story elements and gameplay mechanics that tell us a bit more about what to expect from the next entry in the Fire Emblem franchise.

The thread includes info on the protagonist's origins and additional characters, which isn't too different from previous games like Fire Emblem: Awakening. It also includes a look at how familiar mechanics are changing with Three Houses' new narrative structure.

The three houses each feature a weapon specialization that's unique to their units. The Adrestian Empire is skilled in magic, Holy Kingdom of Faerghus is better with spears, and the Golden Deer students prioritize bow and arrows. You'll have to choose one house at the beginning of the game, and these specializations could help shape your playstyle. It's not clear if there will be other non-cosmetic features that are unique to certain houses.

Three Houses features a time rewind mechanic similar to Fire Emblem Echoes: Shadows of Valentia, letting you take back certain moves during battle. Class changes, one of the staples of the franchise, are also getting slightly tweaked: units will now need to pass qualification exams to rank up. The chance of successfully passing those exams increases if the unit has the proper skills. I never thought I'd be going back to school in a Fire Emblem game, but here we are.

Some of these features could be adjusted before the game comes out later this year, but this is still a good peek into how the series is changing as it comes to Nintendo Switch for the first time.