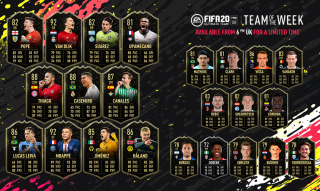 FIFA 20 TOTW 19 is here after a thrilling football weekend, including a Liverpool team that at times looked shaky against a below-par Manchester United, but finished with a 2-0 victory. Virgil van Dijk emerges from that game with an in-form rated 92 after scoring the first goal and keeping a clean sheet, while Kylian Mbappe also features in this FIFA 20 Team of the Week after scoring a brace against AS Monaco. Here's the full FIFA 20 TOTW 19, which will feature in packs from 6pm GMT today (Wednesday, January 22).

Alongside van Dijk and Mbappe, Thiago from Bayern Munich is an 88-rated CDM after a glorious display which included a goal in their 4-0 away win against Hertha Berlin. Casemiro is also included as the CM scored two goals to beat Sevilla 2-1, while elsewhere in La Liga, Borja Iglesias is an 87-rated CM after scoring and assisting against Real Sociedad. It's important to mention Braut Erling Haaland too, as the 19-year-old striker is a brand new signing at Borussia Dortmund; he was subbed on in the 56th minute, scored before the hour mark, then scored another two in the following 10 minutes for a hat trick. Incredible. Here's the complete FIFA 20 TOTW 19, including the substitutes and reserves: