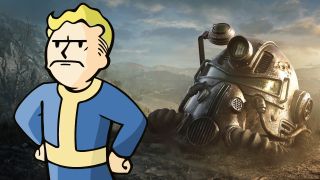 Update: After issuing a paltry sum of 500 Atoms - about $5 of in-game currency - to Fallout 76 Power Armor Edition buyers who felt burned by the cheap nylon bags they received, Bethesda has now vowed to issue proper canvas bags to all eligible buyers. It's unclear if these will be the exact bags that were originally promised, but Bethesda says they are indeed made from canvas. Power Armor Edition holders can claim their replacement bag via this support page by providing proof of purchase and shipping information. The replacement offer will be open through January 31, 2019. Bethesda says the replacement bags will be sent out as soon as they're ready.

Bethesda’s $200 Fallout 76 Power Armor Edition has finally got into the hands of its buyers, but people have discovered that the bag is made of nylon instead of canvas. A post by Redditor Fethennour has received over 124K upvotes, which details how Fethennour received a rather crappy-looking nylon bag with his Power Armor Edition instead of the advertised canvas bag.

The bag was specifically described as being a “Canvas West-Tek Duffel Bag” in the original poster, but it doesn’t take a genius to see that what people have gotten instead is a rather cheap-looking nylon bag. Not good. But hey, raise it with Bethesda, and it’s probably just a mistake, right? Wrong. Upon emailing the Bethesda Gear Helpdesk, the response Fethennour got was less than helpful. Bethesda replied that “the bag shown to the media was a prototype and was too expensive to make”, and that it isn’t “planning on doing anything about it”.

Reddit has rallied around Fethennour’s complaint, and after raising it again on social media, finally got some reimbursement from Bethesda. Notice I write 'some.' Bethesda is giving recipients of the Power Armor Edition 500 atoms to spend in the Fallout 76 in-game store. That doesn’t sound like a lot, because it isn’t, as that’s £3.99/$4.99 in real money. 500 atoms gets you the grand total of one country door, and a some succulents.

I like succulents as much as the next millennial or generation Z, but come on. The Power Armor Edition originally cost $200, so getting reimbursed £3.99/$4.99 hardly seems fair. A more fitting reimbursement would be the ability to buy the Rocketsuit that costs 1200 Atoms, the hallowed Sniper Outfit for 1400 Atoms, or the American Patriot Paints for Power Armor, which costs 1800 Atoms. 2000 Atoms costs £15.99/$19.99 in the Microsoft Store, which is more fitting. Let’s just hope that Bethesda responds to people’s complaints sharpish, as this issue isn’t helping Fallout 76’s already dubious reputation.

If you are playing Bethesda's take on the MMO genre, you might need our Fallout 76 tips by your side.