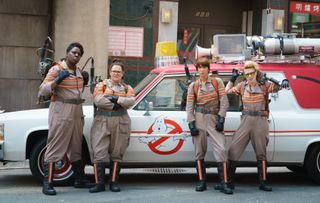 The new Ghostbusters movie is a whole new film in its own right rather than a sequel. However, that doesn’t stop it referencing the original. Quite a lot in fact with cameos and nods all over the place linking it to the past. Let’s take a look at all the ways it tips a spooky hat to the 1894 classic.

There's going to be a few spoilers here obviously, so be warned.

In the original film, parapsychologists Venkman,  Stantz, and Spengler form the Ghostbusters after being kicked out Colombia University. In the 2016 version  the new team of Gilbert (Kristen Wiig), Yates (Melissa McCarthy) and Holtzmann (Kate McKinnon) do exactly the same after being fired from their research jobs. Only Gilbert works at Colombia this time, though.

While Harold 'Egon' Ramis sadly died in 2014 that doesn't mean he didn't make an appearance in the film. And, no, not as a ghost. The co-writer of the original film can be seen as a bronze bust in Colombia University.

By a complete coincidence (yeah, right) the new Ghostbusters movie has exactly the same logo as the original, only this time with a little backstory. When the gang investigate a subway ghost, a local graffiti artist tries to draw what he saw in spray paint, much to the annoyance of ticket clerk Patty Tolan (played by Leslie Jones). When she tells him she doesn't want to see it on her wall, he crosses it out... and the Ghostbusters take it as their emblem.

Well, brother. Maybe. In Ghostbusters 2, the Scoleri Brothers were the ghosts of two criminals that appeared attached to their electric chairs. In Ghostbusters 2016, a ghost that appears in the subway is from an old prison, still with his prisoner suit on and the metal head strap still attached from his execution. Likely a nod to the original sparky spirits.

While the 2016 Ghostbusters end up based over a Chinese restaurant it doesn't mean they don't get to take a look at the classic Hook and Ladder 8 Firehouse. It's instantly recognisable as they run around inside, and immediately left behind when the $2100 a month rent comes up.

Bill Murray actually has a relatively prominent part in the new movie. Not huge, but more than a walk on. He plays a noted skeptic and debunker in the movie called Martin Heiss that calls BS on the Ghostbusters. Later he visits them to demand proof.

'Listen, can you smell that?' is a classic Dan Aykroyd line from the original movie that's referenced here when Chris Hemsworth is told not to listen to a conversation and does so by covering his eyes. Later, when there's a loud noise he does the same thing again.

Played by Annie Potts, Ghostbuster's dry receptionist turns up behind a hotel desk answering phones with all the warmth and charm of the first film. She also repeats a line from the film, 'Wadda ya want?'. It's also repeated by Chris Hemsworth's 2016 receptionist on the Ghostbuster's answerphone.

Dan Aykroyd's appearance in the film is brief but fun. During a ghost outbreak Gilbert (Kristen Wiig) hails a cab driven by Aykroyd. He's not mad on picking up the fare and tells her (something like) "I don't work after ten, I don't drive out to Chinatown and I ain't afraid of no ghost", neatly referencing the classic theme song. It's something Melissa McCarthy also does while looking for a flyer slogan and wonders about "If there's something strange..."

Of course Slimer's there. We've all seen him in the trailers. There's no good reason why, it's just him.

At one point in the film the Ghostbusters face off against a spectral Macy's parade of spooky balloons. One of which just happens to be the big fluffy white guy from the first film.

In a double nod to the original film, not only does the climax of the movie see a face off against a giant entity, but it's also a version of the Ghostbusters logo. A kind of a spooky twofer.

Sigourney Weaver appears in the new film as Holtzmann's mentor. It instantly becomes clear where Kate McKinnon's character got her crazy hair, style and eccentricities from.

Crossing the streams is never mentioned, or indeed done in the film, but the idea of total protonic reversal is specifically named and, once again, like the original film, is how the gang save the day.

The Ernie Hudson Cameo (and the hearse)

In the new film Leslie Jones' Patty borrows her uncle's hearse to use as the ghost mobile. At the end of the movie her uncle turns up to get it back, played by non-other than Ernie Hudson, who played Winston Zeddemore in the original films.

And that's just about it. I'm sure I missed a few things after only one viewing so if you notice anything else drop it in the comments below. And, if you haven't already, check out our review of Ghostbusters here.