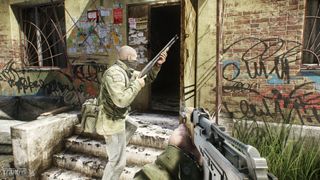 The developer of Escape From Tarkov, a hardcore MMO shooter that is currently one of the most watched games on Twitch, has reiterated that it has no intentions to add female playable characters to the game.

Escape From Tarkov has surged up the Twitch rankings recently, and is currently the fifth most watched game on the platform. This sudden increase in popularity for the game has also seen an old wwcftech interview with developer Battlestate Games resurface, where it was claimed there wouldn't be female playable characters in the game because "we came to the conclusion that women can't handle that amount of stress. There's only place for hardened men in this place."

In light of this interview re-emerging, Battlestate Games has responded on Reddit and Twitter. Firstly, Battlestate COO Nik Buyanov wrote in a Reddit post about the interview: "never said that! I do really respect women in wars. I never said that bullshit that "women are not allowed to be in war". "Women can't handle the stress of real combat" ?? WTF? I never gave such answers in any of the interviews."

It should be noted that wwcftech's interview was with Pavel Dyatlov, a Unity developer on the game, and not with Buyanov.

Then Battlestate Games made a statement on Twitter to clarify the comments made in the 2016 interview.

The employee was reprimanded and properly instructed. We are sorry for caused confusion #EscapefromTarkovJanuary 6, 2020

However, it then followed up this tweet by stating that while there are female non-playable characters in the game, with plans to add more, they won't be adding female playable characters for "lore" reasons and the work it would take to animate them.

But there will be no playable female characters because of game lore and more importantly - the huge amount of work needed with animations, gear fitting etc#EscapefromTarkovJanuary 6, 2020

As you can imagine, this provoked a wide range of responses, from support to exasperation.

come on, guys. I have hundreds of hours in your game, I sincerely think it's one of the most unique and promising shooters out there, but this is weak. "because of game lore" is meaningless - you decide the lore. if you actually cared to add this it wouldn't be an obstacleJanuary 7, 2020

Thanks for this guys. I’m a veteran who happens to be a woman and I love your game. it’s been a great amazing community and I’ve had nothing but the community show me respect, welcome me with open arms, and got me to love a game when I thought i was burning out on games.January 6, 2020

Thanks for all 4 tweets that help clarify everything, especially since it’s like midnight for you all. Not every game needs to have all genders as playable characters, and personally I understand the development load it would add, and I appreciate you staying true to your art. 👍🏻January 6, 2020

Just use male animations and hit boxes this can be a purely cosmetic change. We don't need big boobs and lip gloss.January 6, 2020

This isn't the first time that animation for female playable characters has been a talking point around a game, with Assassin's Creed Unity also receiving flak back in 2014 for cutting female playable characters from its co-op mode. While there's clearly a huge resource difference between a Ubisoft game and one coming from a small indie team, it's still eye-opening to see this reasoning being revisited in 2020.
2020 promises to be a huge year for gaming, so why not take a look at our upcoming games list to prepare?