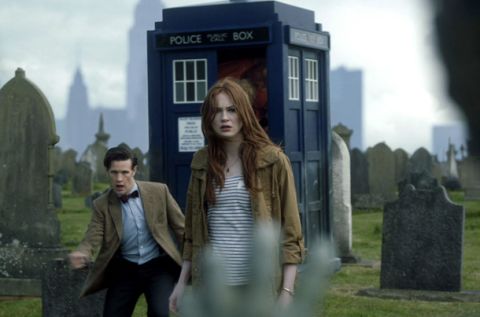 THE ONE WHERE The Doctor discovers a hotel in 1930s New York that’s actually a battery farm for the weeping angels.

THE VERDICT Thank God the departure of Amy and Rory was delivered with such gutwrenching emotion, because the dramatic clout of their bittersweet exit from the show distracted you from the fact that this was a bit of a multi-“Huh?!” episode. On one level it's a glorious, daring, gutsy, high-concept and hugely entertaining slice of Who , with individual moments of the show at its best: creepy, funny and visually arresting. On another level, it’s downright baffling…

Let’s get to the quibbles in a minute and wallow for a while in the wonders of “Angels”. It was undeniably a great final episode for Rory and Amy as their story came to a heartbreaking but dramatically satisfying end. Both Arthur Darvill and Karen Gillan were on top form and their scenes together – whether taking the mick out of each other in Central Park, or committing to the ultimate sacrifice on the roof of Winter Quay – made you love them even more, just before they were cruelly whisked away from us. The moment when Rory sees his older self die in front of his eyes must rate as one of the new series’ greatest moments, and then we got another mere minutes later when Amy deliberately turns away from the angel to say goodbye to the Doctor, knowing she’ll be zapped into the past. Exquisitely sad.

The episode also had a great noir feel, which director Nick Hurran captured perfectly. Even a simple scene such as River and Rory being driven around 1930s New York in the back of a car looked stunning. Hurran also excelled in the creepy scenes; Rory being menaced by the baby angels in the basement was strong stuff, with some excellent sound design (that freaky giggling).

The central concept – that the Angels have created a kind of battery farm in Winter Quay – is a good new twist on the Angels’ MO. This episode they seemed to be less instinctual and more intelligent, which makes them even scarier. They won’t just immediately zap you: they may play with you first; they may even have plans for you. Even the idea of a worn-out Angel – who can only grab and not use her timey-wimey powers – works in context rather than seeming like a handy (ahem) plot device. Conversely, the Angels seem less ready than ever to attack – or even move – when they get the chance; there are characters blinking and looking away all over the place, most crucially Amy and Rory during that rooftop scene.

Other good stuff: another brilliant performance from Matt Smith; a less over-the-top River (loved the fact she tried to hide her broken wrist… and the moment the Doctor learns she has); the reading glasses (which were foreshadowed last week in a phone message from the optician); the clues in the chapter titles; the TARDIS landing; the final voiceover from Amy. There was lots of great stuff here.

But, oh dear, what a lot of blanks to fill in and vague explanations. You may not notice them at first, but it’s one of those episode that starts niggling away at the back of your mind even as the end credits roll.

And what’s all this stuff about the Doctor not being able to visit a "fixed time”? That’s a new bit of mythbabble that’s been handily introduced. And what was River doing in 1938? You get the distinct feeling that it all added up in Moffat’s head – and if you challenged him, he’d have all the answers – but somehow something (a few somethings) got lost in translation.

And I don’t even want to try to follow the thread of how the book was written and made its way into the Doctor’s pocket for fear of ending up enmeshed in one of those arguments about “closed loops” that followed “The Big Bang”. I’m willing to accept the novel idea, because, well, it's a novel idea.

So let’s not get too bogged down in nitpickery when in so many ways it’s such a beautifully-constructed episode. Okay? Got that? Right? Good…

DID YOU NOTICE? The Angels’ “battery farm” is in Battery Park… ho ho ho. Wonder if the name of the place helped Steven Moffat with his inspiration for the story?

SPOILERS! Let’s hope the Doctor doesn’t take Amy’s request in her final message to him too literally – if he tells young Amelia everything that’s going to happen to her, think what timey-wimey chaos that would cause!

(NOT) SPOILERS! So if chapter titles aren’t spoilers does that mean that Steven Moffat doesn’t consider episode titles as spoilers either? Some extreme spoilerphobes certainly think they are. Also, how could Moffat resist having “Amelia’s Last Farewell” as Chapter 11?

IT’S WOSSISFACE Grayle is played by Kansas-born Mike McShane, who’s probably still best known in the UK as one of the regular guests on improvisation-based panel game Whose Line Is It Anyway ?

TRIVIA After “Daleks In Manhattan” there was some criticism that the Statue Of Liberty didn’t have the correct torch for the time period. This time round the torch is only ever seen in the distance, but maybe there’s someone out there old enough (it was changed in the mid-’80s) who'll be able to confirm if this authentic for the time?

LOGO MAKEOVER OF THE WEEK On-screen it’s actually a bit tricky to work out, but it’s much clearer on the official BBC Doctor Who site – it’s the Statue Of Liberty’s crown. Surely giving the logo a marbling or rock-like effect (to represent the Angels) would have been the more obvious option?

BEST LINE :
Amy: “Rory, stop it, you’ll die.”
Rory: “Yeah, twice, in the same building on the same night. Who else could do that?”

Read our other Doctor Who series 7 reviews