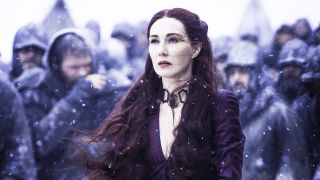 We’re all more than familiar with Game of Thrones’ White Walkers by now. Everyone knows about their pale, freezing skin, their tendency to spear dragons right in the heart (RIP, Viserion), and their love of resurrecting corpses to fight for them in battle. You might want to give Game of Thrones season 7 a rewatch now that it’s out on Blu-ray, because my next statement is, well… you should probably sit down. George RR Martin has clarified that the wights the White Walkers create (the ones that look like zombies to us) aren’t the only undead beings in the upcoming Game of Thrones season 8. The ability to raise the dead isn’t confined to the White Walkers. Oh no. R’hllor, the god who’s worshipped by Melisandre, has his own undead servants: fire wights. And you’ve already met two of them. Before we get any further, consider this a spoiler warning for season 7. You have been warned.

Martin announced the revelation in an interview with Time. In fact, it was Tolkien who first made him think up the idea of fire wights. Turns out he’s always been bothered “that Gandalf comes back from the dead” stronger, better, and more powerful than before. “It always felt a little bit like a cheat to me. And as I got older and considered it more, it also seemed to me that death doesn’t make you more powerful [...] if someone comes back from being dead, especially if they suffer a violent, traumatic death, they’re not going to come back as nice as ever”. No kidding. Anyone who knows Lady Stoneheart from the books (the resurrected Catelyn Stark) knows that wights are shells of their former selves. The Red Wedding turns Catelyn merciless, in a chilling example of what happens in the world of Game of Thrones when someone is brought back to life. “In my version of the story,” says Martin, “Catelyn Stark is re-imbued with a kind of life and becomes this vengeful wight”.

Not that we’ve seen Lady Stoneheart in the TV series, though. The decision was made to cut her from the story, yet we’ve encountered a few fire wights in the show. Two, in fact. Thanks to Thoros of Myr’s magic hands, Beric Dondarrion has been brought back to life by the Lord of Light six times. Now Martin says that Beric is “a wight, but a wight animated by fire instead of by ice”. And it’s no coincidence that the show uses Beric as a way to show us the consequences of being resurrected time and time again. Because apparently - and rather ominously - we need to know what’s in store for Jon Snow. “Poor Beric Dondarrion [...] was set up as the foreshadowing” for Jon Snow’s weariness after he came back from the dead, says Martin. That doesn’t bode well at all.

So, what changes do these fire wights undergo? For a start, every time Beric gets brought back “he’s a little less Beric,” according to Martin. “His memories are fading, he’s got all these scars, he’s becoming more and more physically hideous, because he’s not a living human being anymore. His heart isn’t beating, his blood isn’t flowing in his veins”. After Martin was left disappointed by the way Gandalf’s resurrection was dealt with, you can bet that being raised from the dead is not a good thing in his book. Every time he comes back Beric is a little less human, and that’s not just because bits of him are missing. He’s losing his identity. Forgetting memories will do that to you, as will the fact that, in the books, he has no idea why he’s being brought back. He’s unsure of his purpose. Eventually it’s entirely possible that Beric’ll just be a wandering shell of a human, without any memories or awareness of whether he’s part of some great plan.

13 questions we have after watching Game of Thrones season 7

That’s the fate that awaits Jon Snow. After being brought back to life by Melisandre - or Davos, depending on which theory you believe - he’s a changed man. In an Entertainment Weekly interview Kit Harington says that “when Melisandre asks: ‘What did you see?’ [...] he says: ‘Nothing, there was nothing at all.’ That cuts right to our deepest fear, that there’s nothing after death. And that’s the most important line in the whole season for me. Jon’s never been afraid of death, and that’s made him a strong and honorable person. He realizes something about his life now: He has to live it, because that’s all there is”. With no afterlife and no salvation, Jon has “been over the line and there’s nothing there. And that changes him. It literally puts the fear of god into him. He’s seen oblivion and that’s got to change somebody in the most fundamental way there is. He doesn’t want to die ever again. But if he does, he doesn’t want to be brought back”.

Like Beric, Jon isn’t sure why he’s been brought back. In his own words in season 6, “I did what I thought was right. And I got murdered for it. And now I’m back. Why?”. Despite his confusion about what his purpose is now - incredibly similar to Beric’s, we should point out - he’s not acting unusually. He’s the same fair, even-tempered Stark. In season 7 we didn’t see him flip any tables or start acting nihilistically. In fact, upon his return to Winterfell, he decides to let the Karstarks and Umbers keep their ancestral home instead of giving them to the Stark’s more loyal supporters. He does wring Littlefinger’s throat, but overall there’s none of the detached vengeance we see in Lady Stoneheart, or the trauma that Martin has a penchant for. Maybe Jon Snow has escaped this one scot-free...

But it’s unlikely that Jon Snow is going to have a smooth ride in season 8. Being brought back to life - or turned into a wight, depending on how you look at it - is the ultimate sign that he has a colossal role to play in the future of Westeros. Plus, the show has to prove to us that he wasn’t just brought back from the dead for no good reason. There has to be some kind of consequence. Maybe Dany - who has definitely noticed Jon’s scars thanks to their steamy rendezvous on the ship - will assume he’s the Prince who was Promised once she learns he’s come back from the dead. Having a harbinger of prophecy by her side could make him a threat to her power as a figurehead.

Or the tale of his resurrection could become common knowledge, leading to Cersei using it as ammunition against him, calling him an infidel as he’s marked by the Lord of Light and not the Faith of the Seven. The way Jon darted a warning glare at Davos when he was about to say that the Stark gave his own life for his people proves that Jon knows it’d make things particularly difficult if that incident became common knowledge. Regardless, it would feel like a bit of a cheat if Jon’s state of undeath (Martin does describe the other resurrected character Beric as a ‘wight’, remember) doesn’t get brought up. Let’s hope the showrunners prove to us that getting brought back to life is no quick fix.