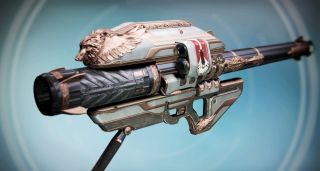 Reddit user JpDeathBlade recently shared a big datamine text dump on Reddit, and while the headlining act is a round up of the Destiny 2 Moments of Triumph 2019, there's a potential megaton hidden amongst the miscellaneous details. If the scattered teasers in this post are on-target, we could see a Destiny 2 Gjallarhorn in the next few months, Gjallarhorn being the strongest and most iconic Exotic rocket launcher - and probably the strongest Exotic, period - in the original Destiny.

As JpDeathBlade explained, details on the upcoming Solar Week event have started to crop up in Destiny 2's backend. Solar Week isn't actually on the Season of Opulence calendar, but it'll probably arrive before Destiny 2 Shadowkeep in September. Early information suggests Solar Week will be functionally identical to Arc Week: a weeklong event featuring elemental challenges and major updates to specific subclasses and Supers - in this case, solar ones. The updates in Arc Week were so fun that I changed my main Guardian, so Solar Week will be one to watch no matter what happens. That said, the most tantalizing teaser has nothing to with subclasses and everything to do with a rocket launcher.

"Rocket launcher components" seemingly connected to a quest subtitled "Scattered pieces of a greater whole" were also spotted in the datamine. Gjallarhorn is a solar rocket launcher, so you can see why this raised a few eyebrows. But it's actually the "greater whole" snippet that's really curious. The last time we saw Gjallarhorn was in Destiny's Rise of Iron expansion, and to obtain its Year 3 version, we had to collect scattered pieces of it and reforge them. You can probably see where this is going.

Does this confirm that a Destiny 2 Gjallarhorn is on the way? No, not at all. This quest may have been cut entirely, or it could lead to Dragon's Breath - another solar Exotic rocket launcher from the original Destiny - or it may be another benign Gjallarhorn Easter egg like the Gjallardoodle cookies in last year's Dawning event. And even if Gjallarhorn does return, I doubt it'll be as strong as it was in its heyday. All that being said, this is a damn compelling teaser, and I'm willing to hope.

We just got the Destiny 2 Truth, so what's one more returning Exotic rocket launcher?