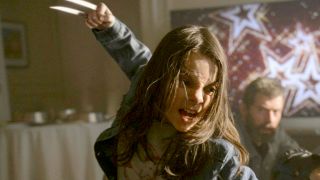 Midway through watching Logan, you’d be forgiven for thinking what the fuss was about with X-23, played by Dafne Keen. Then, all of a sudden, she explodes into a frenzy of angry Spanish and, bam, a star is born. It turns out, she showed that same level of ability way back in her audition tape/screen test with Hugh Jackman, even going toe-to-toe with Wolvie in an improvised version of the scene that made the final cut. Watch her outstanding acting chops (or should that be claws?) here…

The audition tape, revealed by Entertainment Weekly and featuring on the upcoming Logan Blu-ray, is prefaced by Patrick Stewart calling it “one of the most extraordinary bits of audition tape I’ve seen in my life.” High praise, indeed. It’s also NSFW. Unless your work lets you watch videos of grown men swearing at children.

Deen packs a punch, too. Literally. After the audition tape, Hugh Jackman went home with bruises all over his shoulder after being punched by X-23 in the scene.

The scene, if you haven’t seen the movie or need a refresher, involves X-23 desperately trying to convince Logan to take her to ‘Eden’, a fabled sanctuary for mutants. The audition tape is scarily close to the final product, proving that Dafne Keen nailed it from the get-go.