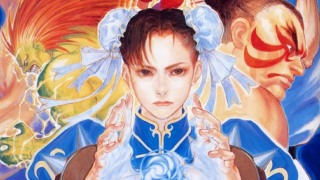 The runaway success of the Super Nintendo Classic helped kickstart a wave of modernized plug-n-play systems, from Sony's PlayStation Classic to the newly revealed Sega Genesis Mini. Now Capcom's joined the plug-n-play arms race, though its contender is anything but mini. Behold, the Capcom Home Arcade in all its glory:

At a staggering 74 centimeters long, 22 centimeters wide, and 11 centimeters tall (to the joysticks), the Capcom Home Arcade is handily the biggest plug-n-play in ages - possibly ever. With a €230 (around $260) price tag, it's also one of the most expensive yet.

Of course, Capcom isn't necessarily going for the same easy-to-use experience as the SNES Classic. This beast is meant for Capcom fans who want to play some old favorites with a buddy and don't mind a little bulk, hence the mirrored arcade control schemes with eight buttons and one joystick apiece. It's worth noting these are Japanese cabinet-style layouts using Sanwa sticks and super-sensitive buttons (unlike Western arcade cabinets with their bat-top joysticks and bulky buttons). Oh, and speaking of old favorites, here are all 16 included games:

Not a bad selection! It is surprisingly light on Street Fighters, though. Knowing Capcom, I figured they'd cram in at least three different entries to show off different characters and eras, especially since the system supports global leaderboards. There are certainly plenty of co-op beat-'em-ups to take advantage of the system's dual-stick setup. In fact, if I'm not mistaken, all 16 games support co-op play. Maybe you and a friend could go in on this pricey system together?

Will the Capcom Home Arcade join our list of the best retro consoles? Let's hope the emulation is good.