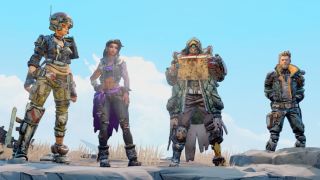 Even after its day-one update, Borderlands 3 is having major performance issues on all platforms, including PS4 Pro and Xbox One X. The official Gearbox forums and Twitter, as well as the Borderlands subreddit, were flooded with reports over the weekend, many of them citing the same issues ranging from FPS dips to corrupted saves to multiplayer lag.

Early technical analyses from groups like Digital Foundry found that the PS4 Pro and Xbox One X versions of Borderlands 3 regularly dip below their targeted frame rates in both resolution and performance mode, with resolution mode on Xbox One X delivering the stablest 30 FPS experience. Base model PS4 and Xbox One consoles, on the other hand, struggle constantly.

We've played Borderlands 3 on PS4, PS4 Pro, and PC (specifically, on a PC above the game's recommended specs), and we've run into performance issues on all three. The frame rate consistently dips during combat or vehicle sections, and it utterly nose dives in multiplayer whenever a player opens their Echo menu or examines an item (which is quite often). PC players have also reported that merely aiming down a gun's sights can cause stuttering, and we've experienced this ourselves as well.

FPS dips aside, platform-specific problems abound. On console, online multiplayer and local split-screen can render Borderlands 3 all but unplayable due to intense menu lag and bizarre, unchangeable settings. Where Borderlands 2 allowed for vertical or horizontal split-screen, Borderlands 3 only supports a horizontal orientation, meaning the screen is split into two halves stacked on top of each other. Countless posts on the Xbox and PS4 Gearbox forums say that this renders text illegibly small. Sadly, in a statement to Comic Book, a representative from publisher 2K said that "there are no plans to add vertical split-screen at this time."

Those are just the technical issues; we haven't even gotten to the bugs. Player names sometimes disappear in multiplayer, quest markers often vanish from the map, FL4K's pets randomly stop moving, sometimes your inventory just moves items around, and the fast travel menu often bugs out and limits your choices - and those are just bugs we've experienced firsthand. More worryingly, several players have reported crashes, lost progress, and corrupted saves. Lost saves seem to be especially common on PC, though they may be due to hard drive or cloud save issues.

It doesn't help that these issues weren't spotted earlier due to Borderlands 3's bizarre review arrangement. Simply put, the majority of publications, especially UK-based ones (like us), didn't receive Borderlands 3 review code until the day of or the day before its release. As VG24/7 reports, 2K says this was due to security reasons. Stranger still, the few publications that did get early access were locked to an early, non-release PC build of the game which was only accessible via supplied Epic Games Store accounts. This resulted in initial reviews that were limited in more ways than one. Needless to say, we're working on our Borderlands 3 review now and will have it ready as soon as possible.

In Twitter replies to disgruntled users, Gearbox said it is aware of many of these issues and working on fixes, but it's unclear when those fixes will arrive. We've reached out to Gearbox and 2K for more information and will update this story if we hear back. If you're already playing Borderlands 3 and you're among those experiencing issues, your best bet is the dedicated support page. You may also see some improvement by lowering your FOV, disabling in-game social and network notifications, or playing in fullscreen mode using Directx11 if you're on PC. These are only patchwork solutions, of course, and it's clear Borderlands 3 is in dire need of some proper updates.