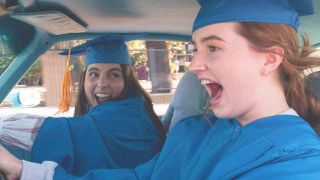 As March beckons and we bid farewell to February, now’s as good a time as any to catch up with the best movies on Amazon Prime. With awards season all wrapped up, the pressure is off to watch every single major movie nominated in every single ceremony. Sure, it’s film-watching, but boy can it be exhausting trying to squeeze everything in! We encourage you to kick back and relax, take your entertainment at a more leisurely pace, and work your way through all the movies you pushed aside in favour of those awards season contenders.

Well, where should you start? Re-evaluate your watchlist, and spruce it up with a batch of top-shelf titles that have, for some reason, eluded you until now. That’s right: remove all those documentaries you swore you’d watch. Delete the horror that you’re constantly too terrified to hit play on. Make your watchlist a list of things that, you know, you’ll actually watch. This here rundown is a great place to start adding titles that every cinephile has to see. And sure, while they’ve not all earned awards, they’re all winners in OUR book, so get going on the 30 best movies on Amazon Prime right now.

The movie: Five years after the Spanish Civil War, Spain remains turbulent, with Allied forces set to free Europe from the Nazi regime. This troublesome time in Spanish history serves as the oppressive backdrop for Guillermo Del Toro’s glorious fantasy. While the war rumbles on, life for young Ofelia isn’t easy either, what with her mother marrying her evil stepfather, Captain Vidal. His orders, to flush out rebels in the countryside, lead their family to a rural retreat, where Ofelia befriends a faun who lives within a labyrinth filled with both wonder and terror.

Why it’s worth a watch: Del Toro’s take on wartime horrors is handled with imagination like you wouldn’t believe, a wondrous moodscape of darkness and delight. This grown-up fairytale meanders between the reality of war and the dream of the labyrinth, and does so with such a light touch, you’ll wonder where one ends and the begins.

The movie: Between work on The Godfather and its sequel, Francis Ford Coppola dove straight into this low-fi espionage thriller, that stars Gene Hackman as surveillance expert Harry Caul. Hired by an unseen client through an intermediary (played by a pre-Star Wars Harrison Ford), Caul is tasked with tailing a couple and records a rather cryptic conversation between the two. The Conversation is oft-seen as Coppola’s reaction to the Watergate scandal and, whatever you make of it, it’s a damn fine paranoia parable.

Why it’s worth a watch: One of the few times that a director has lost to himself at the Oscars! Yep, two of Coppola’s movies were nominated in 1975, The Conversation and The Godfather Part 2, with the latter scooping up the Best Picture gong. It’s chilling to watch a film that’s nearly half a decade old and realise the tensions at its core remain the same today.

The movie: Greta Gerwig makes a flawless transition behind the camera in her directorial debut. Bringing the witty banter she often infuses her scripts with to this tale of ‘90s teen angst, it’s simply one of the best movies of the year. On the cusp of heading to university, Lady Bird (Saoirse Ronan) tries to figure out life in all its forms in her hometown of Sacramento, California. All of her relationships go through the ringer. How she deals with her mom (a superb Laurie Metcalf who was robbed of an Oscar), how she figures out the truth about her first boyfriend (you will cry) and how to maintain her best friendship. It’s simply one of the best movies of the last year.

Why it’s worth a watch: Much like this year’s Eighth Grade, Lady Bird feels like this is the first time we’re seeing this particular coming-of-age experience on screen. It’s funny as hell right off the bat, as Metcalf and Ronan take verbal sparring to the next level, and takes sharp swerves into emotional, tear-jerking terrain with ease. You’ll laugh, you’ll cry and you’ll love these characters.

The movie: Neil Marshall’s Dog Soldiers takes place in the Scottish Highlands, a location that boasts plenty of natural beauty, yet in this instance they’re also home to something else. Something with teeth. A group of British soldiers tasked with a nighttime training exercise against a Special Ops team in the Highlands quickly discover their training has been derailed when only one person remains of the Special Ops crew. The rest, ripped apart by unseen beasts. Luckily, there’s a farmhouse nearby where they can wait out the Full Moon.

Why it’s worth a watch: Vampires had a major resurgence in the last 20 years. Werewolf movies? Not so much. Dog Soldiers remedies that, playing like a fantastic ‘80s genre flick loaded with gross-out, bloodied action and one-liners galore. A glorious mash of horror, thriller and action, you can’t go wrong with this R-rated gem.

The movie: The high school experience in ‘80s cinema was growing stale. Enter Heathers. A black-as-night comedy that renovates and greatly improves that pre-existing formula, it spins the unseemly undertones of many teen films into a new tale where the popular kids get a taste of their own medicine. Winona Ryder and Christian Slater star as Veronica and JD, a mismatched couple whose shared hatred of Veronica’s friends, the elite clique of Heathers, unites them. As the trio of girls start to exhibit more revolting behaviour, Veronica and JD hatch a plan to silence them, and teach them a lesson: by murdering them and making them look like suicides. Yes, it’s dark. But dang, it’s funny.

Why it’s worth a watch: Arguably the teen movie which changed the face of teen cinema forever. No other film in the genre has so expertly carved up the very audience it is supposed to entertain. Whether through vicious one-liners, barbs so sharp they’d slice your skin (“Did you eat a brain tumour for breakfast?” or this writer's personal favourite “Dear Diary, my teen angst bullshit has a body count.”) or the horror these teenagers subject one another to, there’s no other movie this funny about a topic so tragic.

The movie: Paddington Bear returns for his second big-screen feature. This time, he’s become a regular fixture on his street, having settled in with the Brown family and found his place in the world. Eager to give his Aunt Lucy the best birthday present ever, he saves his money in the hopes of buying her a magical antique pop-up book. Alas, poor Paddington’s plan is scuppered when a thief steals the tome and the marmalade-loving bear is mistakenly arrested for the crime.

Why it’s worth a watch: Is Paddington 2 better than Paddington? The mere fact of asking that question should really say everything about how damn good this movie is. Still rocking a 100% Rotten Tomatoes rating two years after its release, this sweet, kind-hearted, and surprisingly action-packed flick is guaranteed to hit you in the feels.

The movie: Proof that you don’t need a million dollars to create suspense and genuine character interactions, writer-director James Ward Byrkit delivers one of the best low-budget genre movies of the last decade. Eight friends meet for a dinner party on the same night that a comet passes through Earth’s atmosphere. On an ordinary evening, that might provide a conversational spark, but on this night all bets are off, as the group start to experience some seriously strange occurrences. Side effects of the celestial event, or, is there something else at play?

Why it’s worth a watch: It’s hard to say why you should see Coherence without utterly spoiling it. Like The Invitation, another superb dinner party movie that changes course, this movie is best watched with very little knowledge of what’s about to happen. This is glorious filmmaking; proof that a shoestring budget and no script can lead to excellence.

The movie: Silicon Valley’s Kumail Nanjiani writes and stars in this comedy based on his own marriage. The trials of cross-cultural romance come under scrutiny as stand-up comic Kumail falls for an American student at one of his shows. Not exactly the life his Muslim parents had in mind for him, but that’s the least of his concerns; shortly after they start dating, Emily falls into a coma, leaving Kumail to have to deal with her parents.

Why it’s worth a watch: Billed as a traditional romantic comedy, The Big Sick has a lot more heart and edge than the posters and trailers would have you believe. The chemistry between Nanjiani and Holly Hunter and Ray Romano - as Emily’s parents - provides most of the real grit. Realistic, and proof that there is still a lot of originality left in the genre, The Big Sick is one of the best movies on Amazon Prime Video.

The movie: Where the fourth entry in the Mission: Impossible series hit the ground running following a five-year break, it seemed… uhhh, impossible, for another sequel to somehow better that kinetic frenzy. Somehow, Rogue Nation did. Now, director Christopher McQuarrie does it yet again with Fallout, finding that sweet spot of plot, action, and making Tom Cruise risk his life to deliver another pulse-pounding piece of cinema. Ethan Hunt returns to scale heights and throw caution to the wind, typically at the same time, with his IMF crew in tow. This time the gang are in pursuit of a terrorist group planning to detonate three plutonium cores simultaneously across the globe.

Why it’s worth a watch: Let’s get this out of the way now – no-one watches the Mission: Impossible franchise for its strict adherence to reality. No. We watch for the bombastic stunts and seemingly nonsensical feats of action bravura and Henry Cavill’s ability to grow a moustache by recharging his fists. Cruise and co. crank things up to 11 and re-establish the series as arguably the best ongoing action franchise. Roll on MI7.

The movie: Following an alien invasion, the world has moved on. A race of scuttling extraterrestrials sensitive to sound now permeate the Earth, making human lives a different proposition. Just ask the Abbott family, led by Evelyn (Emily Blunt), her husband Lee (John Krasinski), and their children Regan, Marcus and Beau, who have lived in near-silence for years as a way to keep the beasts at bay. What begins as a normal day trip for Lee and Marcus quickly turns to a monster fight.

Why it’s worth a watch: Oh, aside from the fact that everyone and their mother and their mother’s tennis partner were talking about it last year? A horror that will shred your nerves and have you hardly breathing, nevermind talking, Krasinski’s directorial debut is a superb exercise in terror-filled set pieces. Oh, and we're getting a sequel soon...