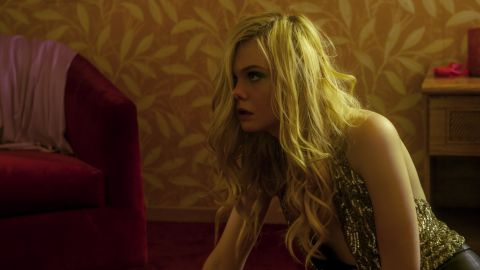 A shallow, slow-burn horror that takes an age to get to the strong meat but looks good doing it.

Nicolas Winding Refn’s 10th feature might just be the Danish provocateur’s most outrageous yet. A horror movie set in the fashion world of Los Angeles, it features home invasion, vampirism and supermodel cannibals, the last of which would surely be a genre staple if they’d just do more than nibble at a hunk of flesh before returning to their salads. And if that’s not enough to whet your appetite or make you barf depending on your tastes, Refn chucks in some gorgeously lensed lesbian necrophilia.

Just turned 16, Jesse (Elle Fanning) is fresh off the bus and looking for work. Turns out her “deer in the headlights look” is coveted by an industry that spits women out at 21, and she’s soon being stripped naked and slathered in gold paint by a psycho photographer (Desmond Harrington) who looks set to stab her to death with his scalpel-sharp cheekbones at any moment. Jesse’s rise is stratospheric, leaving catty cat-walkers Gigi (Bella Heathcote) and Sarah (Abbey Lee) to accentuate their pouts as they eat her dust.

“Beauty isn’t everything, it’s the only thing,” says Alessandro Nivola (whose credit as Fashion Designer recalls Ryan Gosling’s as The Driver in Drive), and it’s a philosophy that Refn embraces. Thinner than a lettuce leaf and only half as nourishing, The Neon Demon says that our obsession with beauty is beastly – and that’s it.

But if it’s looks you’re after, this one’s a stunner, from the neon-drenched nightclubs and stroboscopic catwalks to the shimmering swimming pools and night-time skyscrapers that glitter like diamonds on crushed velvet. The camera tracks and prowls with exquisite precision. Dialogue is slowed to a seductive slur. And the urgent pulse of Cliff Martinez’s (Drive, Solaris, Traffic) electro score is the movie’s giddily exciting heartbeat.

Here, style is form: vivid and vapid. Perhaps it’s all part of Refn’s theme, his fabulously hollow movie reflecting a beautifully empty world. But even if it is, it makes for rather uninvolving and ultimately forgettable drama. What’s more, the designer DNA that The Neon Demon uses as its building blocks – The Wizard of Oz, Valley of the Dolls, Last Year at Marienbad, All About Eve, Persona, Blood and Black Lace, Mulholland Drive – only highlights shortcomings.

Still, there are tasty turns from (an underused) Keanu Reeves as Hank, a lecherous motel owner, and from Jena Malone as a make-up artist who, like everyone else, wants a piece of Jesse. And did we mention it’s funny? This last is crucial, because while The Neon Demon might not be as disturbing, scary or unpalatable as The Daily Mail or, indeed, Refn would have you believe, it does succeed as a horror-comedy: even the aforementioned lesbian necrophilia is, ahem, tongue in cheek, the laughs as black as blood in the moonlight.

A shallow, slow-burn horror that takes an age to get to the strong meat but looks good doing it.