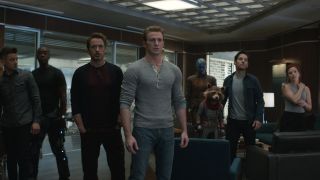 It's no longer enough for blockbuster movies to show us action set pieces of a scale we've never seen before. Avengers: Endgame has now proved that they can also be a rollercoaster of emotions, making us laugh one moment and cry the next – anyone who claims their eyes didn't get slightly moist at least once while watching Avengers: Endgame is either lying, or was watching a different movie.

So we've chosen five Avengers: Endgame moments liable to unite cinema audiences in a collective cheer, and five more that are likely to make them weep.

Spoiler warning! If you haven't seen Avengers: Endgame yet, please click away now!

We're about to talk about some of the biggest moments in the movie – moments you'd probably prefer to learn in a cinema.

Five Avengers: Endgame moments that made us punch the air...

After all Thor’s hard work saving Asgardians at the end of Thor: Ragnarok, it was something of a kicker when Thanos wiped half of them out at the start of Avengers: Infinity War. We never did find out what happened to Valkyrie, Korg and Miek, of course, and while the Endgame poster showed that Valkyrie had definitely survived, the fate of the solid-as-a-rock revolutionary with a Kiwi accent was still unknown.

Until we discovered Ragnarok’s breakout star was hanging out with Thor’s new Big Lebowski incarnation in New Asgard, playing Fortnite and getting abuse from angry gamers. Welcome back, sir – you still rock.

Endgame revels in rewarding knowledge of the 21 MCU movies that came before it. In fact, when Steve Rogers, Tony Stark and Scott Lang head back to 2012 and the infamous Battle of New York, they bring with them the hindsight that SHIELD has been infiltrated by the Red Skull’s old outfit, Hydra – something we didn’t find out until 2014’s Captain America: The Winter Soldier.

Cue Steve Rogers stepping into an elevator with Brock “Crossbones” Rumlow and a bunch of other SHIELD/Hydra heavies, all of them reluctant to hand  Loki’s Infinity Stone-powered staff to Cap. Just as you’re expecting it to turn into a The Winter Soldier-style elevator rumble, however, Cap turns round and says, “Hail Hydra!” It’s amazing how quickly everyone can be friends again...

The good thing about timey-wimey plotlines is that you can resurrect the dead – and Loki isn’t the only product of Asgard given an unexpected comeback in Endgame.

Having been unceremoniously destroyed by the Thunder God’s bad egg of a sister, Hela, in Thor: Ragnarok, cosmic hammer Mjolnir comes back into play when Thor grabs it during his trip to the Thor: The Dark World era. And seeing as Thor’s already replaced his old hammer with magical axe Stormbreaker, there’s now a spare magical weapon for Captain America to brandish after his shield is all but destroyed by Thanos. If you're watching Endgame in a cinema where the audience don’t cheer when it turns out Cap is worthy (like we didn't know...), look around to check the person next to you hasn’t been turned to dust.

Even Earth’s Mightiest Heroes have their limits. Iron Man, Thor and Captain America have done their best to keep Thanos at bay, but as his vast forces assemble it looks like game over. Until, that is, Cap hears a quiet “On your right” in his earpiece.

Not only is it a subtle echo of his first meeting with Sam “Falcon” Wilson in The Winter Soldier, it’s the precursor to a load of Doctor Strange-instigated magic portals opening, bringing with them the entire undusted MCU cavalry: the Guardians of the Galaxy, the military might of Wakanda, several sorcerers supreme, Scarlet Witch, Spider-Man and the Wasp... not to mention finger snap survivors Valkyrie, and Pepper Potts in her new-look “Rescue” armour. The gang’s all here, setting the scene for one of the most epic battles in blockbuster history.

The early years of the MCU were not characterised by their diversity – this was a franchise massively dominated by white men. Indeed, it still is, but one moment in Endgame suggests that the Marvel Universe will be a much more inclusive place in Phase Four and beyond.

As Spider-Man hands the makeshift Infinity Gauntlet over to Captain Marvel and wonders how she’ll make it through the melee by herself, Shuri repeats Black Widow’s “She’s not alone” line from Infinity War before the camera pans round to reveal Nebula, Okoye, Valyrie, Mantis, the Wasp, Scarlett Witch and Pepper Potts, all ready for action. It’s been a long time coming but change is afoot in the MCU.

Five Avengers: Endgame moments that made us cry

There are plenty of references to the impact Thanos dusting half the population has had on planet Earth – everything from Captain America running a support group to Black Widow stuck behind a desk as director of SHIELD. But few deliver the emotional punch of Scott Lang, freshly returned from five years in the Quantum Realm, sifting through the memorial plaques in a San Francisco park, desperately hoping daughter Cassie’s name isn't among them.

Lang Sr’s name is there – clearly nobody thought to look for him at the sub-atomic level – but crucially hers isn’t, and his reunion with a daughter he knows but barely recognises is a rare moment of light in the darkest segment of the movie.

There’s a strong argument that Black Widow – one of the founding members of the Avengers – should have survived long enough to face Thanos in the climactic battle. But coming before the final act has properly kicked into gear, her sacrifice has genuine emotional power – particularly as it’s a rare of example of death in a superhero movie being for keeps.

And it arguably wouldn’t have worked with any other character. As we learned to Gamora’s cost in Infinity War, taking the Soul Stone from Vormir exacts a terrible price. Sadly for Ms Romanoff, no other pair of Avengers share the BFF bond that Hawkeye and Black Widow do, that sense that each would do anything to protect the other. Fate ultimately decrees it's Black Widow who must take the fatal plunge, but ask yourself this: would anyone really have cared if it had been Hawkeye who’d bought the big one? Even with that cute family potentially waiting for him at home?

As Joss Whedon shows have frequently proved, sometimes you have to kill off characters you love – though Black Widow is tragically underserved by a pitiful memorial at the end of the movie.

Whether it’s Nebula desperately trying to impress her father or Hawkeye turning brutal vigilante after losing his family, Endgame is entirely driven by the relationships between parents and their children. So it’s no surprise that many of the film’s most emotionally resonant moments concern that bond.

Thor’s reunion with his late mother, Frigga, in The Dark World era Asgard is moving –turns out all he needed was a loving arm around his shoulder – but it’s Tony Stark’s 1970 encounter with his father, Howard, that carries the real power. After an entire life spent intimidated by his old man's shadow, Tony belatedly learns how much his dad loved him.

Stark has two memorable hugs in the movie – his embrace of surrogate son Peter Parker is sweet, but this is the one with the real emotional heft.

I can has cheezburger?

You could easily weep through the whole of Tony Stark’s funeral – it’s such an impressive reunion of MCU stars past and present that you can forgive the hint of The Return of the King-style “too many endings” syndrome. But the real tearjerker comes in a smaller moment, when Stark’s long-term assistant Happy Hogan asks Stark's young daughter Morgan if she likes cheeseburgers, like her dad. His promise to make sure she gets all the cheeseburgers she wants is an eloquent way of saying he’ll always be around. Beautifully played.

We’ve long suspected that Steve Rogers would be bidding farewell to the MCU in Endgame – long-running contracts wrapping up will do that – but only in our wildest dreams could his departure have been so perfect.

Technically he does come back from his trip through time to return the Infinity Stones to history, but he’s taken the long-way round – and the old man we meet on a bench has lived the life Steve Rogers never thought he’d get. Turns out he's spent it with the love of his life, Peggy Carter, and that shot of the pair of them dancing in the past is one of the most beautiful  moments in the whole of the MCU.

Even better, the Captain America name will live on through Sam Wilson – Marvel’s Falcon and the Winter Soldier TV show is starting to look very exciting indeed…

Avengers: Endgame is in cinemas now. Here's where the Marvel Phase 4 Cinematic Universe could go next...