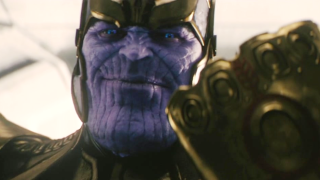 Unless you’ve been living under a rock for the past half-decade, you’ll know that Thanos is the Big Bad on the fast-track to give the Avengers a gauntlet-sized headache. Avengers: Infinity War, though, won’t just include the purple tyrant giving Earth’s Mightiest Heroes a tough time – say hello to Thanos’ right-hand man, Corvus Glaive.

As first reported by Digital Spy, shots from filming the next Avengers movie in Edinburgh revealed mo-cap actor Terry Notary wielding a, uhh, glaive. At least we know where Thanos’ brother-in-arms gets his name from. Talk about original.

As for that weapon? It looks like a cross between Loki’s staff and something you’d pick up from some cold, dead hands in Bloodborne. In other words: all kinds of amazing. It’ll be interesting to see how Cap and co. deal with the threat after the climactic events of Captain America: Civil War.

Glaive, in the comics, is Thanos’ most trusted Lieutenant and is part of Black Order/Cull Obsidian who are essentially Thanos’ personal hit squad. Don’t be surprised to see them come face-to-face with the Avengers first before Thanos arrives.