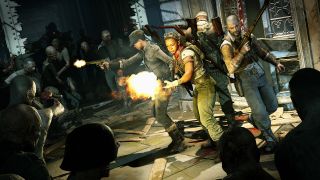 Zombie Army 4: Dead War was released this week, and players have discovered a new and creepy feature on DualShock 4. While the game relentlessly hurls undead hordes at you and up to three co-op partners across all levels and modes, you may think hitting the pause button would provide some momentary salvation, but you’d be dead wrong.

Pausing the game at any point activates a feature on the DualShock 4 that few games have used: its internal speaker. As heard in the video below, the game audio taunts you about every 30 seconds with unsettling messages whenever you’re paused. “Play with me,” it sometimes whispers. “Come back!” Naturally, the folks at Rebellion must have had a good laugh when they put this into the game and proceeded to warn literally no one ahead of time. Well played.

If it doesn’t seem relevant for a zombie game to feature creepy voices of demonically possessed children, it actually makes sense in context. The game features a ton of secrets and easter eggs and one of its recurring gags is Annabelle-like dolls popping up all over the campaign. Often they’re tied to complicated optional puzzles and we’ve not yet cracked their code completely, but we’re pretty sure it’s meant to be their voices we hear in this feature, not some suddenly speaking zombie, even if such a thing has been done before. We reviewed Zombie Army 4 on Xbox and thus hadn’t heard this feature ourselves until now, but in hindsight, that’s probably for the best.

If you need more of the genre to bite into, check out our ten best zombie games available right now.